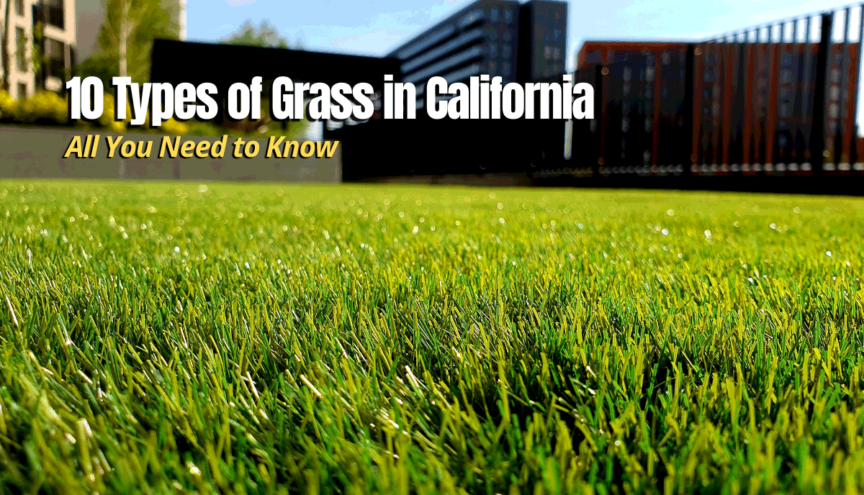 With mega droughts threatening California and lawn irrigation accounting for 70% of all household water use, picking the right grass (or lawn alternative) can not only provide you with a better looking lawn when droughts strike but also save you a lot of hassle, grief, and money. Which grass is right for your California lawn? Read on to find out.

What To Know About Grass In California?

As severe droughts continue to plague California, you just can’t grow the same lawn that you used to. You have two options: learn new lawn care practices or switch to a lawn alternative.

If you want to keep your lawn but lower water use:

But do you actually need or want a grass lawn? While having grass rather than concrete or astroturf can help cool your yard by 10 degrees and give kids and pets a place to play, you’ll get the same benefits and a lower water bill by using a lawn alternative. Lawn alternatives like clover, kurapia, and yarrow will stay green all year round.

With up to 70% of household water use going towards lawn irrigation, districts are paying as much as $6 a square foot for homeowners to remove their lawn and replace them with district-approved drought-tolerant alternatives (so no plastic grass). If your lawn is already struggling or you’d like to make the switch, these programs can cover most or all of the costs of installing an alternative.

When starting or replacing a lawn, wait until water becomes more available. All plants, even the native drought-tolerant plants, need more water when getting established. Cool-season grasses need cooler temperatures in the fall or spring to germinate and grow.

While most of California has mild summers, Southern California benefits from warm-season grasses that love high temperatures, especially as heat waves become more frequent. To keep cool-season grasses from going dormant during heat waves, you must water more, but you can also let them go dormant/brown (watering occasionally to keep them alive), and they will bounce back. Warm-season grasses stay green and grow best during the heat of summer.

While most of California doesn’t need to worry about overwintering their grass, if you’re at a higher elevation, winter temperatures drop below freezing. This is the one region where choosing a cool-season grass may be more appropriate, as you won’t benefit as much from the heat tolerance of warm-season grasses, and most can’t handle the cold (Blue Grama and Buffalo Grass can!).

Los Angeles is famous for many things, and one of those things is smog. Smog and smoke from wildfires are terrible for both people and plants, so turfgrasses may struggle under heavy smog or smoke. They also make it difficult to be outside to care for your lawn and can block out sunlight.

As of July 1, 2022, California enacted a ban on gas-powered lawn mowers and leaf blowers, as they are an enormous source of air pollution. If you don’t want to buy another expensive electric mower, look for a low or no mow grass, and consider switching to a reel mower. Reel mowers have come a long way in making it easier physically to mow. Better yet, push reel mowers make little noise! Many people who make the switch report that mowing the grass is now a favorite part of their day, enjoying their yard in peace and quiet.

10 Types of Grass in California 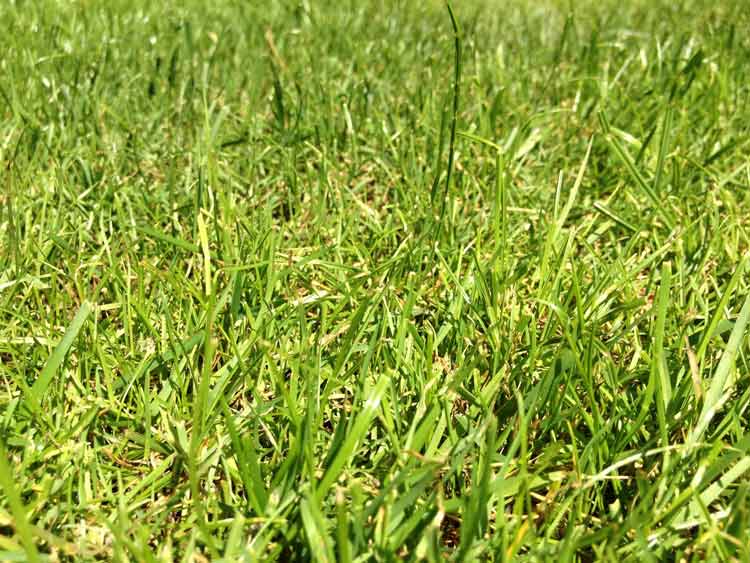 One of the most popular grasses in the southern US, Bermuda grows very well in Southern California. While Hybrid Bermuda grasses like Tifgreen, Tifway II, and Santa Ana are popular choices, look for newer cultivars and cultivars developed in Australia like Celebration for higher drought tolerance and lower water use. Santa Ana is more tolerant of smog than other varieties. In regions with cooler winters, look for higher cold tolerance. 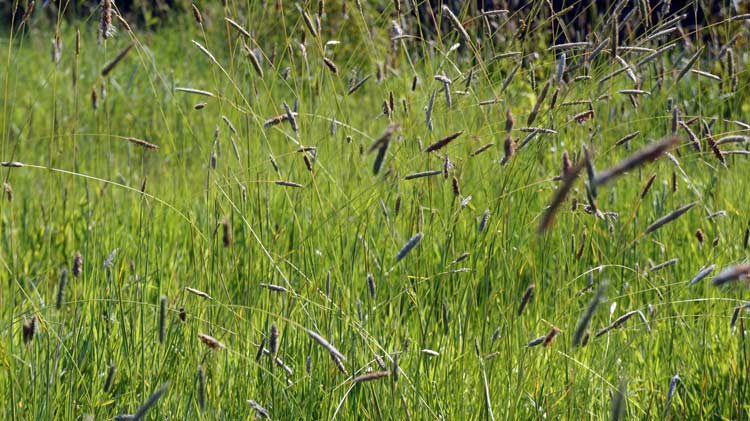 Native to California, this warm-season grass makes an excellent turfgrass or ornamental grass. Since it’s native to semi-arid regions, it can handle the dry air and extended droughts. Blue Grama grows even better when mixed with Buffalo Grass.

Like Blue Grama, the native Buffalo Grass loves arid and semi-arid regions. In fact, it suffers in areas that get more than 25 inches of annual rainfall. The best Buffalo Grass cultivar for California is UC Verde, which has been specifically developed for California, and can grow well throughout the state.

(In Australia and South Africa, St Augustine is known as Buffalo Grass. St Augustine is very different and not nearly as drought tolerant. When looking for info, make sure they’re talking about Buchloe dactyloides.)

Kikuyu is like Bermuda grass, but much hardier. It needs less water, has higher drought resistance, and needs little fertilizer. Like Bermuda, Kikuyu explodes into growth when exposed to high-intensity sunlight. But it’s far more invasive and difficult to get rid of than even Bermuda. Left to its own devices in the wild, it creates thick mats that strangle other plants and can even suffocate small shrubs. That’s why the California Department of Food and Agriculture has deemed it a noxious weed and restricted Kikuyu to the counties of Imperial, Los Angeles, Orange, Riverside, San Diego, San Bernardino, Santa Barbara, and Ventura. Because of its invasiveness, it’s not recommended for home use.

However, there is one new cultivar out of Australia that promises to be less invasive. If you go with Kikuyu, keep inputs like water and fertilizer to an absolute minimum (it’ll look fine, and more than that will just fuel its aggressive growth) and add edging around your lawn to control rhizomes. 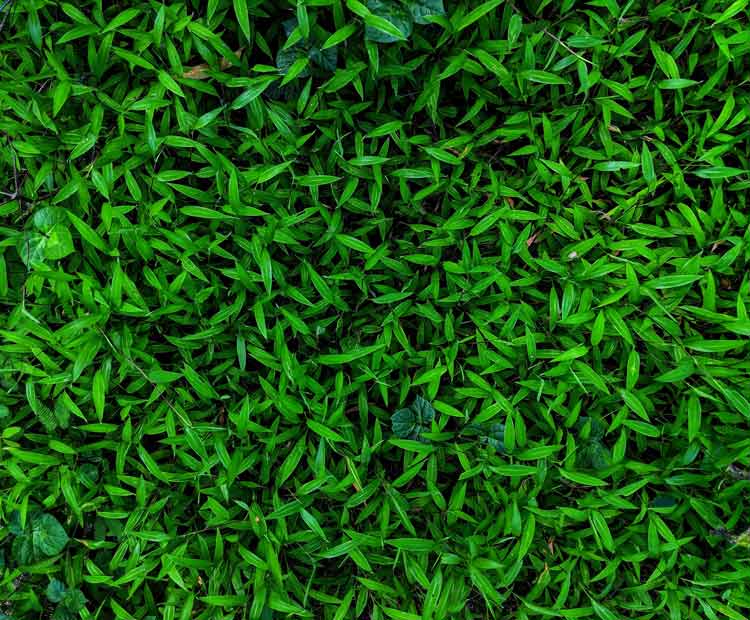 St Augustine hangs onto popularity because it grows well in subtropical regions and in part shade, but it’s prone to pests and disease, and needs a lot more water than other warm-season grasses. Look for other grasses that fit your situation before giving this one a shot.

You can grow Zoysia in the hotter regions like Los Angeles, but along the coast or in the north, it’s just not hot enough for it to grow well. It needs as much water as Bermuda, but it has partial shade tolerance too. Zoysia is one of the most beautiful grasses you can grow, but depending on the variety, it can require a lot of maintenance. Look to other grasses before trying Zoysia. 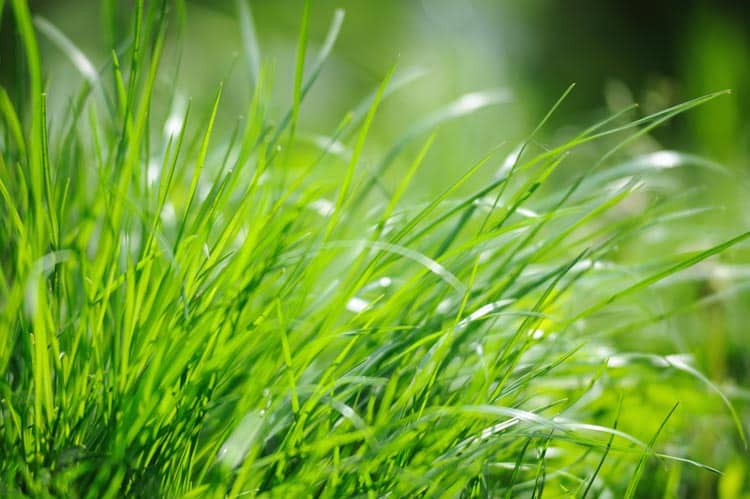 Sheep Fescue is the newest fine fescue on the turfgrass scene, but with its increased drought hardiness, water efficiency, and low to no mowing, it’s a very promising cool-season grass for California.

Also known as Turf Type Tall Fescue or TTTF, the cool-season Tall Fescue is the most widely grown grass in California. The downside is that it requires 30% more water in the summer than warm-season grasses like Bermuda. It’s best grown in coastal, mountainous, and northern regions where you don’t need as much heat tolerance and you can take advantage of its cold hardiness. 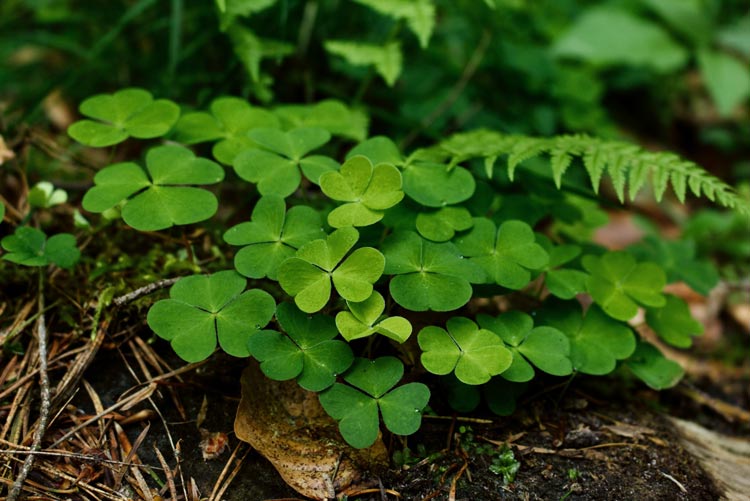 Once only thought of as a weed, Clover lawns are booming in popularity. There’s much to love as Clover:

On the downside, clover will need more water than native grasses like Buffalo, and it will spread. Some people think that a clover lawn looks weedy. It also doesn’t hold up to heavy use.

If you’re not ready to give up turfgrass, or need something that stands up to heavy use, you can overseed your existing lawn with clover. The turfgrass will help the clover withstand heavier use, while the clover will lower fertilizer needs. You could also get a clover meadow blend that includes sheep fescue and yarrow for more resilience. 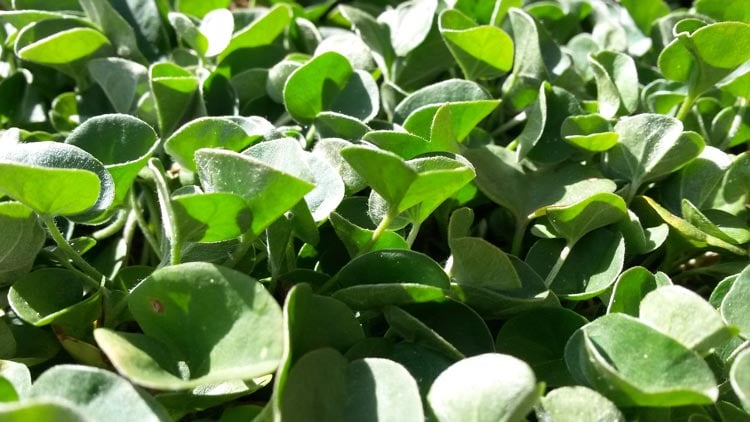 Dichondra lawns used to be all the rage in Southern California, with some remembering it always needing to be watered and others remembering it as needing low water. It’s a low growing herbaceous ground cover with round leaves that doesn’t tolerate much foot traffic. It feels great under bare feet, but is also more expensive and harder to find in nurseries.

Dichondra donellia, AKA California Ponysfoot, is native to California’s coastal areas. Outside of the coast, it’s best planted in the shade to cut down on watering.

Dichondra argentea, AKA Silver Dichondra, is native to the Desert Southwest, so doesn’t need as much water as other species, and needs to dry out between waterings. It has a silver color instead of green. 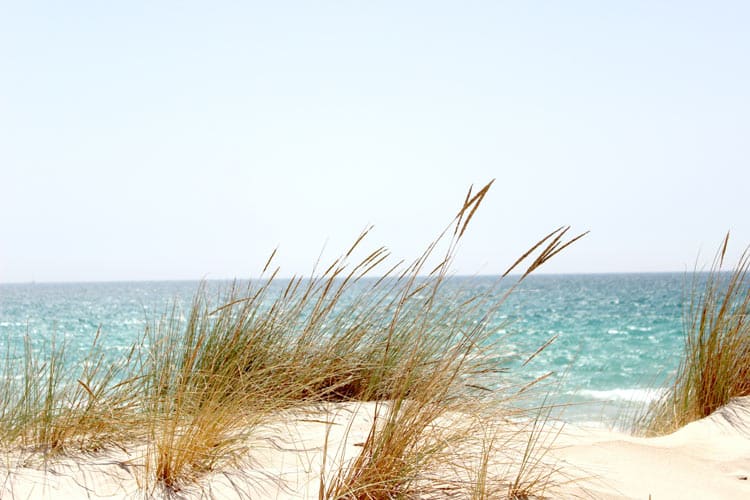 Sedge is not actually grass, although if you look at a sedge lawn, you probably wouldn’t be able to tell the difference. With over 2,000 different sedge species, there’s bound to be one that fits every situation, but one particularly handy species for California is the native Dune or California Meadow Sedge.

Dune Sedge is known as one of the best sedges for natural lawns. It’ll grow in everything from sandy coasts to hot, clay valleys, in full sun and part shade (in deep shade, it’ll thin), and tolerates heavy traffic. It’s very drought tolerant. You will need to mow 2 to 3 times a year to create a lawn-like look, or you can let it grow natural. It’ll stay green in everything but the coldest winters, high heat, and drought conditions.

Kurapia is a herbaceous lawn replacement or ground cover that’s been cultivated to handle high heat and drought conditions. The University of California at Riverside evaluated Kurapia along with other turfgrass species for drought performance, and Kurapia was among the top 3 with Kikuyu and Buffalo. During extended drought without water, it may appear to die back, but it bounces back when it’s watered again. It needs 60% less water than traditional cool-season grasses like Tall Fescue.

Because the cultivar used for lawn is patented, Kurapia is more expensive than other lawn alternatives. 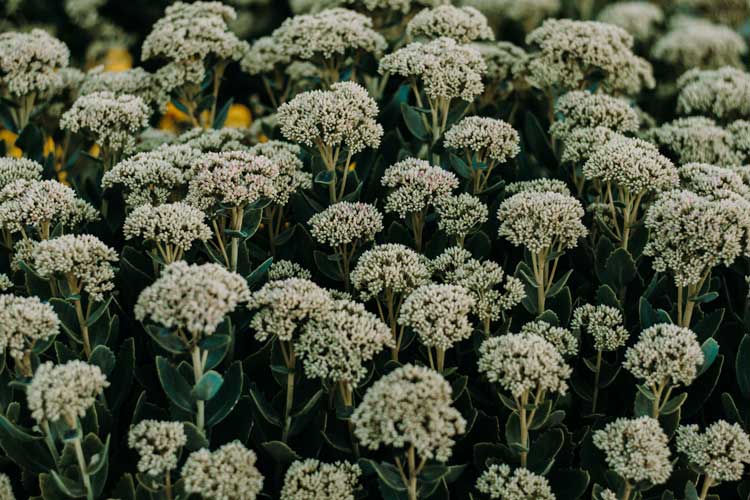 When you think of yarrow, you may be picturing white sprays of flowers sticking up 2 to 3 feet tall. But did you know that when you mow yarrow, it grows as a low mat of fern-like foliage? Mowing removes most flowers, and those that do bloom are only 6 inches tall. It’s extremely picturesque up close, and at a distance, looks like a traditional lawn. It’s also a top contender if you need something that stands up to moderate to high foot traffic – it’s just a little less hard wearing than Dune Sedge.

Yarrow is drought-tolerant, can live in full sun or part shade, thrives in all types of soil with poor fertility, and needs less water than many traditional turfgrasses. It even comes in a variety of flower colors.

Yarrow is invasive, spreading through underground rhizomes, so use edging to contain it. Like clover, yarrow is considered a nuisance in lawns, but if you keep it mowed, most people wouldn’t guess that it’s yarrow.