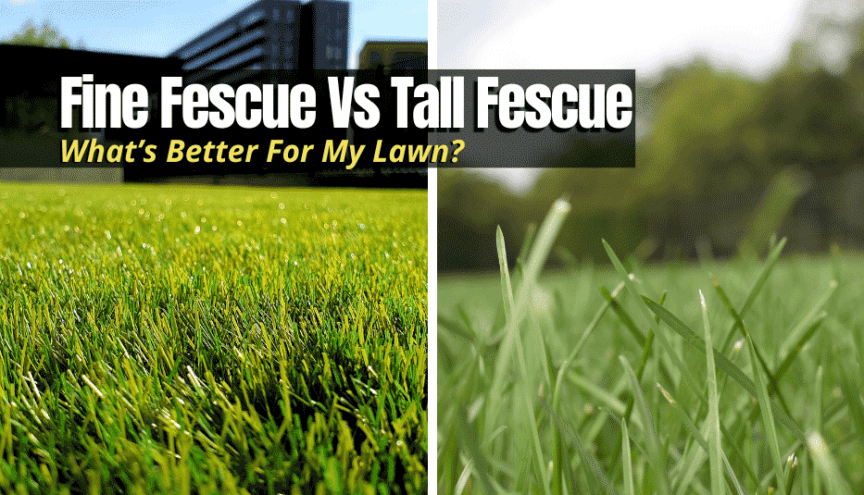 If you think that there’s just one grass called Fescue, don’t worry, you’re not alone. Many people aren’t aware that turfgrass Fescues are divided into Fine Fescues (which comprise 4 fine-leafed species) and Turf-Type Tall Fescue. While these two divisions have a lot of advantages in common, they also have key differences that could result in a better lawn for your unique situation.

What Are Fine Fescues And Tall Fescue?

What Is Fine Fescue? 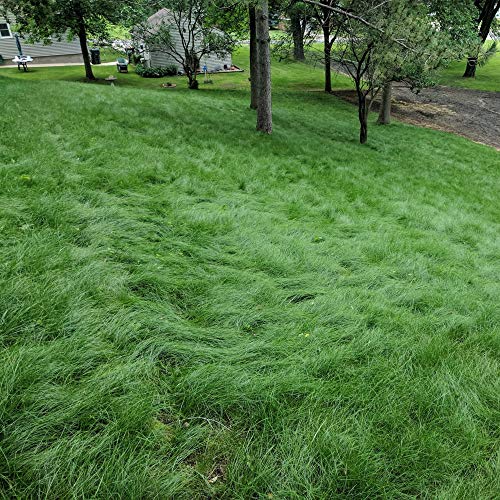 Fine Fescue isn’t a grass species on its own – it’s actually a collection of fine-textured fescue grass including Red, Chewings, Hard, and Sheep. Each has their own benefits, and do well when mixed together. The exact mix you use will depend on your soil, climate, and level of shade. For example, a full-sun lawn in Minnesota benefits from 40% Hard, 40% Chewings, and 20% Red, while a shaded one does better with 40% Chewings, 40% Red, and 20% Hard. Check with your local extension office to see what they recommend for your area and situation.

While other fescues grow by clumps, Creeping Red earns its name by spreading through rhizomes. This means that your lawn can fill in gaps on its own, like a Kentucky Bluegrass lawn. It grows shorter than other Fescues and has more shade tolerance, but suffers in extreme heat. If you have hot summers, it does better under deciduous tree cover so it gets lots of sun when temperatures are cooler but shade when it’s hottest. It bounces back pretty well once the weather cools.

Have a pesky shaded spot where other grasses struggle to grow? Chewings Fescue is for you. Given its preferred loam soil and plenty of organic matter, it thrives with as little as 2 hours of sun per day. Grown in shade, it needs more maintenance and has lower foot traffic tolerance (but that’s a tradeoff you won’t be able to avoid). It also thrives in full sun where it’s much more low-maintenance.

While not traditionally used for lawns, Sheep Fescue is an up-and-coming eco-friendly alternative lawn grass. While Hard Fescue goes into colder zones, Sheep Fescue has more heat and drought tolerance. It’s also very adaptable. If you have especially low annual rainfall (as low as 12 inches per year) and don’t want to irrigate, then Sheep Fescue is for you.

Also known as Turf-Type Tall Fescue (or TTTF) to distinguish it from forage cultivars, Tall Fescue is one of the most common cool-season turfgrasses. With its medium texture, it’s not a fine fescue, but it’s a great all-around low maintenance grass. Tall Fescue has a higher foot traffic tolerance and insect resistance, and will thrive in just about any soil you have.

While Kentucky-31 was the first Tall Fescue used for lawns, it’s not technically a turfgrass or turf-type. More recent cultivars offer finer leaves and denser growth.

Rhizomatous Tall Fescue (RTF) is a variety cultivated from Tall Fescue that grows by rhizomes instead of clump-forming.

Tall Fescue is usually mixed in with Fine Fescues or other grasses like Kentucky Bluegrass.

To learn more about Fine Fescue and Tall Fescue, check out our complete guide to Fescues.

Which Is Better: Fine Fescue Or Tall Fescue? 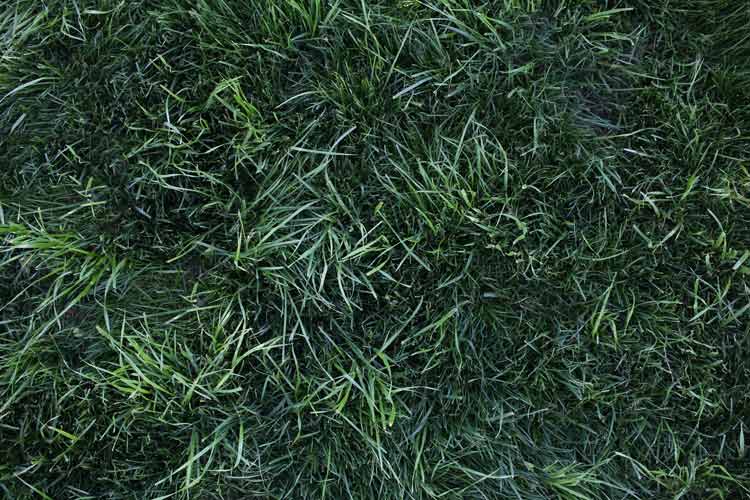 Fine Fescues get their name from their fine-texture. If you’re looking for a cool-season grass that feels glorious underfoot, Fine Fescues are it. The fine texture also gives it a higher quality appearance, although the thin blade also tends to droop. Some people dislike this, but others find it dreamy. Their colors range from medium green to a blue-green similar to Kentucky Bluegrass or Blue Grama.

Tall Fescue has a medium texture that feels fine under bare feet, but isn’t as soft. Some cultivars have a finer texture than others.

As most Fescues grow in bunches, the resulting lawn can look more uneven than a species that spreads with rhizomes. To even out the turf, add a rhizomatous species into the mix (whether Creeping Red, RTF, or Kentucky Bluegrass), overseed to fill in gaps, and mow to encourage the grass to spread out.

Fine Fescues and Tall Fescues germinate in as little as 10 to 14 days, with Red and Chewings germinating earlier. Sheep Fescue germinates the slowest at 21 days and will take the longest to get established as it grows slower. Creeping Red, Chewings, and Tall Fescue will establish itself fast, with Hard Fescue in between them and Sheep.

If you’re doing a single-species Sheep Fescue lawn, you’ll notice the difference in germination and establishment as quick-growing weeds will take advantage, but it won’t take as long as some grass species.

If you’re doing a mix, you probably won’t notice the differences in germination and establishment between different species.

Except for Chewings, mow both Fine Fescues and Tall Fescues to between 3 to 4 inches, depending on the time of year.

Tall Fescue will grow in just about any soil you have, but Fine Fescues prefer loam-based soils. If you’re growing Chewings in shade, then you’ll need to amend the soil more often with organic matter like compost and tread lightly upon it. Sheep Fescue is highly adaptable and does well in nutrient-poor and dry soils.

Both Tall Fescue and Fine Fescues do well in full sun and part shade (at least 4 hours of sun per day). Chewings can thrive in as little as 2 hours of sun. Hardy to Zones 4 – 9, these grasses do well in places with cold winters and brief hot summers (Creeping Red has a harder time in full sun). If you live further south with longer and hotter summers, these fescues will struggle under full sun during the summer and do best under part-shade. Hard Fescue is hardy up to USDA Zone 3.

As cool-season grasses, they grow vigorously in spring and fall during cooler temperatures, and go dormant during the hottest part of the summer unless irrigated. If you have a snowless winter, then you’ll have green grass for 3 seasons of the year.

Both Fine and Tall Fescues have good resistance to insects and disease, but if you’ve had trouble with insect pests in the past, Tall Fescue and Sheep Fescue will really help with their excellent resistance.

Because they’re the same species, they both suffer from the same fungal diseases and insects. Most fungal diseases usually only show up under the right weather conditions but will fade as the weather changes. Most fescue lawns go years without a fungal infection.

Both Fine Fescue and Tall Fescue have low water needs. That means during the summer and during dry periods, a Fescue lawn needs only 1 inch of water every 7 to 14 days, compared to Kentucky Bluegrass which needs 2.5 inches per week [PDF]. Depending on how much rain you get, you may not need to water at all. Avoid over watering, as Fescues do not like soaked water.

They all have good drought resistance, so you don’t need to irrigate during the summer if you don’t care about your lawn going dormant during the summer heat. Dormant grass (with soil temperatures above freezing) will need at least 1 inch of water per month to stay alive – if you haven’t had enough rain, you may need to water.

In southern areas, both Fine Fescue and Tall Fescue will need more water to survive the summer heat.

As Tall Fescue and most Fine Fescues grow in clumps, the gaps in between provide more opportunity for weeds, especially if the lawn grows thin. With all lawns, a healthy and thickly grown lawn is your best guard against weeds. If your lawn is getting thin, overseed. Adding Creeping Red Fescue will help fill in these gaps. Mowing will also help keep weeds under control as they can’t grow as tall as they’d like as well as encouraging the grass to spread out.

Both Tall Fescue and most Fine Fescues germinate quickly, which reduces the opportunity for weeds to jump in. Weeds have more opportunity with Sheep Fescue, so you may need to hand weed during this time.

Both Fine Fescues and Tall Fescue require 2 – 3 pounds of nitrogen per 1,000 sq feet a year. This is considered low to medium, although there are other grasses like Blue Grama and Buffalograss that require only 1 per year. In comparison, Kentucky Bluegrass requires 4 – 5. Some of this nitrogen can be obtained simply by leaving your grass clippings on the lawn – you can return 25% of nitrogen back into the soil.

Apply fertilizer on these cool-season grasses in the early spring and in the fall when the grass is growing most vigorous. Do not apply fertilizer when the grass is dormant (brown) or under heat stress. With its low fertilizer needs, you can easily do with 1 or 2 applications of compost per year. Compost is better than synthetic fertilizer for soil health and structure, absorbs moisture to keep your lawn watered, and provides nutrients at low levels over months instead of weeks. You’re also unlikely to cause nitrogen burn. Plus, Fine Fescues love loam and that’s what compost gives you.

Fine Fescues and Tall Fescue are not prone to thatch as they do not grow via stolons.

If the soil gets compacted, you will have to core aerate Fine Fescue and possibly Tall Fescue. Topdressing with compost will also help ease compaction.

What Is The Toughest Fescue Grass?

How Many Types of Fescue Are There?

There are between 400 to 644 different Fescue species found across the world. The number ranges because it’s sometimes difficult to identify whether a plant belongs in the Fescue genus or in another. These species can be divided by leaf-textured, as fine-leaved and broad-leaved, or by uses, as turfgrass or forage grass.

Can I Mix Fine Fescue With Tall Fescue?

Yes, you can mix Fine Fescue with Turf-Type Tall Fescues. Fescue seeds are often mixed with other Fescues and/or Kentucky Bluegrass to provide better resilience, and they usually cohabitate well. The lawn may not look as even, as Fine Fescues have thin, drooping grass blades while Tall Fescue has thicker, dark grass blades.