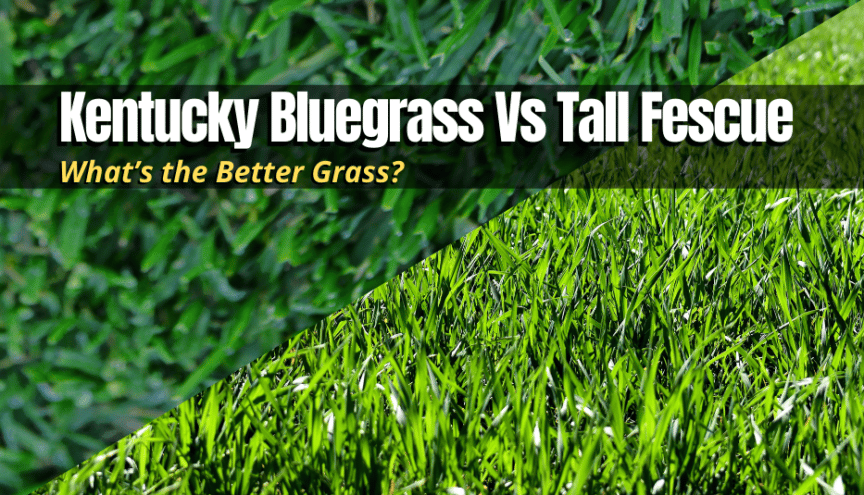 Picking the right grass for your climate and lawn needs can save you a lot of time, money, and hassle. While Kentucky Bluegrass is a northern climate favorite, Tall Fescue has become increasingly popular because of its low-maintenance. Find out which grass is better for your lawn.

What Is Kentucky Bluegrass? 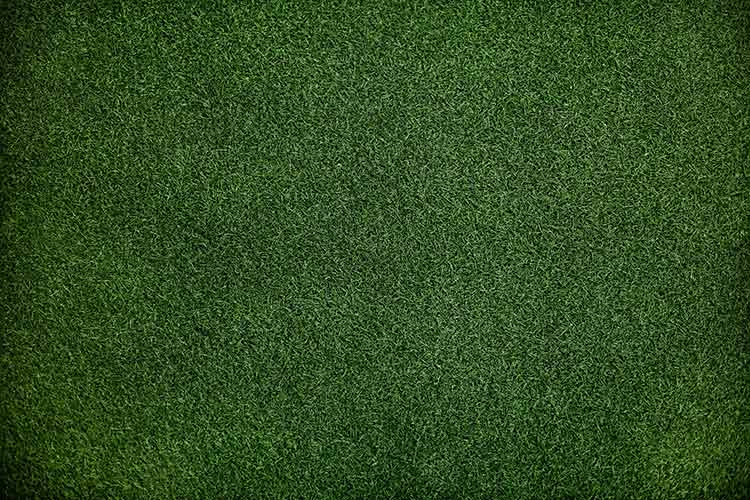 Kentucky Bluegrass is prized in cool-season climates for its fine, soft emerald or blue-green foliage and ability to grow into a thick, lush carpet. It also stands up to a lot of foot traffic and cold weather, making it ideal for northern golf courses.

However, it comes with a high cost and very specific needs. It favors acidic loam-clay soil, and can be difficult to grow in heavier soils.

It also requires the most maintenance and money spent, needing a lot of water and a lot of nitrogen, and in thanks, it is more vulnerable to insects and disease (both of which are exacerbated by high amounts of synthetic nitrogen). Remember, those expertly maintained Kentucky Bluegrass golf courses pay full-time staff to keep their Kentucky Bluegrass in top condition.

Because of its high needs, it’s one of the least sustainable and most environmentally dangerous grasses. Living in a climate that naturally has a lot of rainfall and fertile soils will mitigate some of those costs, or even make this the ideal grass for you. Pair the right climate with organic lawn care techniques, and you will also help minimize pests and disease.

Check out our in-depth guide to Kentucky Bluegrass for more. 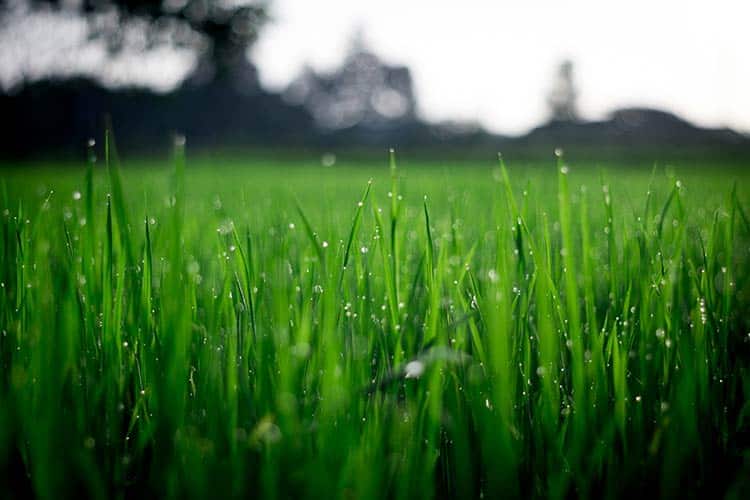 Fescue grasses are prized in cool-season and transition zones for their ability to withstand heat, cold, and drought, all while being fairly low maintenance. Tall Fescue is often referred to as “Turf-Type Tall Fescue” or “TTTF” to distinguish cultivars suitable for lawns from those for pastures.

Tall Fescue’s major drawback is its clumping growth habit, which can make your lawn look uneven. It doesn’t grow into a thick carpet (making it more vulnerable to weeds) and it doesn’t self-repair. However, this doesn’t have to be a deal breaker. You can:

In fact, rhizomatous Tall Fescue was cultivated to spread by rhizomes for that carpet-like growth.

Out of all the Fescues, Tall Fescue tolerates foot traffic better, and has higher resistance to pests and disease. While originally Tall Fescue had a medium texture (feeling more coarse than Bluegrass), you can now find new cultivars with a finer texture.

Check out our in depth guide to Fescues for more.

Which Is Better: Bluegrass Or Fescue?

Kentucky Bluegrass tends to win the grass beauty contest with its emerald and blue-green coloring and fine texture. (Keep in mind that the magazine-worthy lawns have been manicured to within an inch of their life.)

Tall Fescue can also be wonderful to look at, with medium to dark green foliage.

With its fine texture, Kentucky Bluegrass feels nicer under barefoot or when laying on it than Tall Fescue. However, you can find new Tall Fescue varieties with a finer texture. If you don’t plan to walk barefoot or roll around on it, then this difference doesn’t matter.

Tall Fescue germinates faster at 7 to 14 days. And just when Tall Fescue stops germination is when Bluegrass begins, at 14 to 30 days. If you need to cover bare soil fast, or don’t want to commit to keeping soil moist for more than two weeks, then Tall Fescue is better.

However, because of Bluegrass’ rhizomatous growth, it’ll fill in to a thick carpet earlier, while a Tall Fescue lawn (with no rhizomatous species mixed in) may need to be over seeded.

Kentucky Bluegrass prefers loam-clay soil that is between acidic to neutral (5.8 to 7.0). Because of its more shallow root system and its high water needs, it’ll struggle to grow in sandy soil where water drains away much quicker. It’ll also struggle in heavier clay soils. Changing the pH of lawn soil is an exacting and time-consuming practice.

Tall Fescue will do well in pretty much any soil. It also can tolerate more acidic soils than Kentucky Bluegrass, while also tolerating alkaline soils (pH range 5.5 to 8.0). If you have a tricky soil to grow in, Tall Fescue could be the answer. 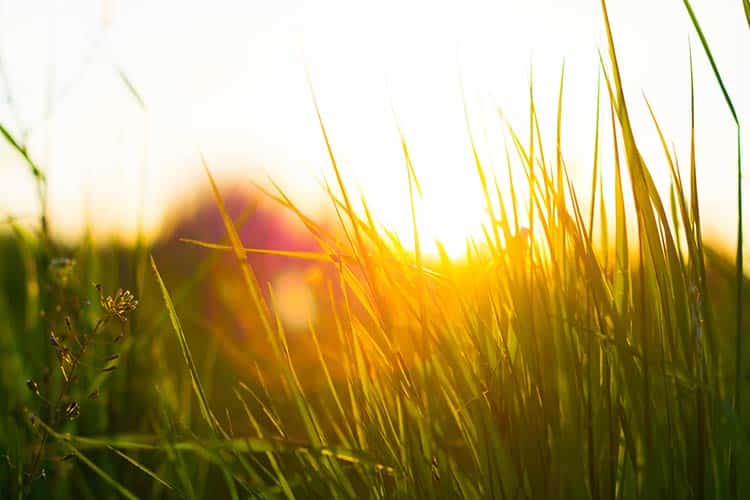 Kentucky Bluegrass needs at least eight hours of sun per day to thrive and will struggle to grow in shade, while Tall Fescue only needs four hours.

Kentucky Bluegrass is vulnerable to insects and disease, in part because it requires a lot more nitrogen. Synthetic nitrogen spikes attract pests like sod webworm and destroy the healthy microbiology in soils, which leaves grass less healthy, more vulnerable to disease, and less able to recover from pests.

Tall Fescue has an excellent resistance to insects, and good resistance to disease. Because of its low nitrogen requirements, it doesn’t have the same problems as Bluegrass. This helps make Tall Fescue less maintenance.

If you know that you’re going to be battling with a particular pest or disease, then Tall Fescue is the way to go. (Save yourself all that effort and enjoy your backyard more.) 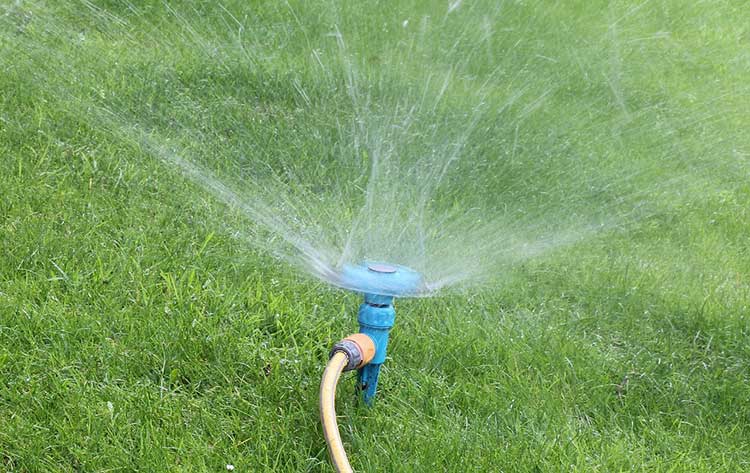 If you live in an area with low rainfall or frequent droughts, go with Tall Fescue. You’ll save a lot of money and time not having to irrigate.

Kentucky Bluegrass is less tolerant to drought because of its more shallow root system, so if you don’t get enough rain for it to thrive, you’ll need to irrigate.

Once established, healthy Kentucky Bluegrass is less prone to weeds simply because its thick carpet leaves little space for weeds to grow and shades the soil to prevent weed seeds from germinating. Before it becomes fully established, though, it is much more vulnerable to weeds.

Tall Fescue can be more prone to weeds, since its clump-growth habit leaves more soil space open. Over seeding and letting grass grow taller to shade the soil helps. Avoid overwatering and over fertilizing as it’ll just encourage weeds. Because Tall Fescue germinates faster, it is less vulnerable to weeds during this stage than Kentucky Bluegrass.

Kentucky Bluegrass requires the most annual nitrogen out of all cool-season grasses, while Tall Fescue requires a low to moderate amount. Using less fertilizer, especially synthetic fertilizer, means less money and time out of your pocket, as well as being less damaging to the environment and local fish. Kentucky Bluegrass’ higher nitrogen need also exacerbates its pest and disease problems.

Going the organic route (using compost and natural amendments instead of synthetics) will help you grow a healthier lawn no matter which grass you choose.

Kentucky Bluegrass is prone to thatch, which may mean renting a dethatcher. Tall Fescue doesn’t have that problem because of its bunch-forming growth habit, and even with rhizomatous varieties mixed in, will still have less thatch problems than a purely Kentucky Bluegrass lawn. Using organic fertilizers instead of synthetic will decrease thatch problems.

How Do I Know If I Have Kentucky Bluegrass Or Tall Fescue?

You can figure out whether you have Bluegrass or Fescue by examining the grass. Kentucky Bluegrass has a smooth canoe-shaped tip with a prominent midrib while Tall Fescue has a rough pointed tip with wide leaf blades with no prominent midrib but with equal-sized veins. Kentucky Bluegrass has an emerald color or blue sheen to it, while Tall Fescue has a medium to green color with no blue sheen.

You can also identify it by its characteristics. Does it do well in part-shade? Does it spread by itself or does it clump? Are your soils alkaline or acidic?

Will Bluegrass Take Over Fescue?

Should I Mix Bluegrass And Fescue?

You can mix Bluegrass and Fescue. By mixing grass species, you’ll balance out the pros and cons of each grass, making Kentucky Bluegrass less high maintenance and giving your lawn higher resilience to survive whatever nature throws at it.