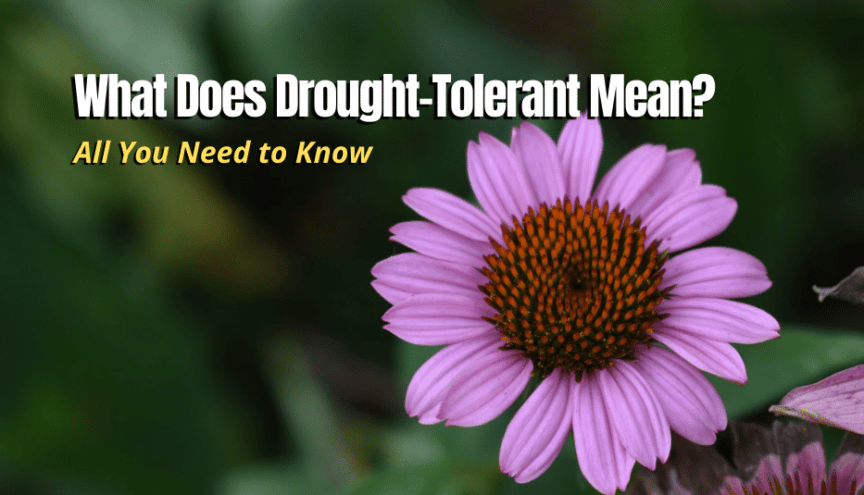 Keeping water-loving plants happy during dry weather is expensive and time-consuming, or downright impossible with water restrictions. The good news is that you don’t need to spend your summer watering while still having a colorful lawn and garden if you plant the right drought-tolerant plants.

Drought-tolerant means that an established plant can tolerate little to low levels of water and still thrive for a period of time. This period can vary from a few weeks to months, so a plant that’s drought-tolerant in one climate may not be in another. It’s often used interchangeably with drought-resistant, which means a plant can survive long periods of time without water.

How Do Drought-Tolerant Plants Work?

Used by mosses and ferns, desiccation tolerance allows a plant to cease metabolic activity when there’s not enough water to carry it out and start again when it does without damaging the plant.

Drought tolerance allows plants to better store water inside of themselves, usually through leaves designed to cut down on water loss (transpiration), trap moist air, shade themselves, and/or reflect heat away.

Plants often use more than one strategy or adaptation to survive dry periods.

Why Might You Want a Plant to Be Drought-Tolerant?

Drought-tolerant plants can help you save water, time, and money, while still providing a beautiful garden or yard. Since drought-tolerant plants need less water, you don’t need to spend additional money and time irrigating them and nursing them through dry periods or droughts. You don’t need to worry about water restrictions. While non-drought tolerant lawns and gardens go dormant, your garden will still be blooming.

You may also want to go with drought-tolerant plants if you have rocky or sandy soil. Sandy soil lets water flow right through, and while adding compost will aid in water retention, you may still end up having to water more than your loam and clay soil having neighbors. Drought-tolerant plants work better with your soil type and make your job easier. 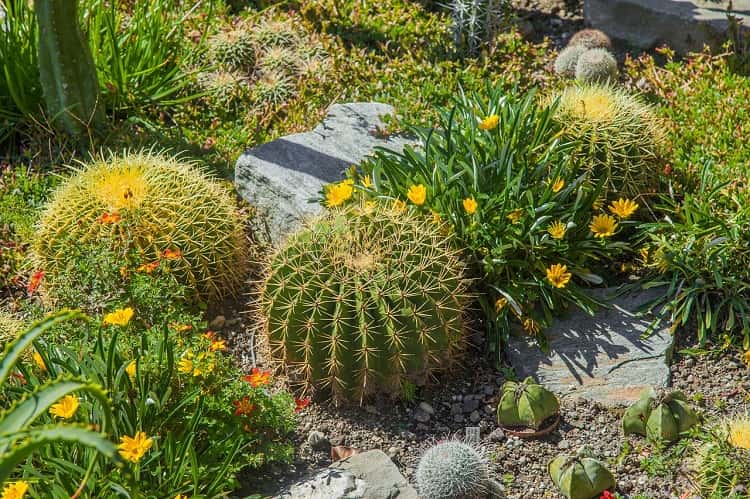 Where are Drought-Tolerant Plants Common?

Drought-tolerant plants evolve in places with periods of low rainfall, seasonal droughts, or sandy soil, like the shrubland, the plains, desert regions, the Mediterranean, and Australia.

What’s the Difference Between Drought-Tolerant vs Drought-Resistant?

Landscape professionals and marketing use drought-tolerant and drought-resistant so interchangeably that it’s difficult to decipher. Officially, drought-resistant plants will survive much longer periods without water than drought-tolerant plants. It’s best to research the best plants for your particular region to ensure that the plants can withstand the length of your dry weather, as plants that can survive a Midwest dry summer may not survive California’s dry period.

Xeriscaping is gardening with water conservation as the number one priority. It’s particularly handy in areas that are drought prone or experience little rainfall.

Select plants that can thrive in your climate. Native plants are your best bet, but you can also choose plants from similar regions to yours.

Group plants with similar needs together, and place them where they can get these needs fulfilled with as little effort on your part as possible. This means identifying where in your garden tends to be drier and which places tend to be wetter. (High places will be drier because water flows away from them, while low places are wetter as rain pools there.) You can also increase moisture retention in drier areas by adding more organic content like compost.

Grade your garden to capture more water (only as needed), taking advantage of water’s natural tendency to move downhill. Adding slopes and terraces can help hold more of the little moisture you get.

Mulch to prevent weeds from growing and hold moisture to the soil below.

Plan for additional irrigation that is water-efficient so you’re not left scrambling when the weather is drier than usual. This could mean watering deeply to encourage deeper roots, watering in the early morning, and using drip irrigation rather than sprinklers.

The best drought-tolerant grasses require low amounts of water and grow deep roots that allow them to access more moisture from deeper layers of soil. Look for cultivars that are bred to be even more drought-tolerant.

For warm-season zones (hot summers, temperate winters), the best drought-tolerant grasses include bahia, centipede, seashore paspalum, and zoysia. The more common grasses like bermuda and St Augustine can also be quite drought tolerant, although they require more water. Depending on where you live, you may even be well-suited to the hardy buffalo grass.

For cool-season zones (cold winters, short summers), the best drought-tolerant grasses include fescues (including tall, hard, red, and fescue) and fairway wheatgrass. If you need more wear resistance and can water a bit more, then go with perennial rye.

For transition zones (those in between warm-season and cool-season), you can either pick one of the above depending on your climate and needs, or consider going with bluestem or buffalo grass. Both are slow to establish, but they’re both native to North America and can withstand both freezing and high temperatures.

Whichever grass you go with, ensure that your soil is at least ten inches deep and use growing practices to encourage deep roots, like watering deeply and letting grass grow longer in the summer.

What are Some Drought-Tolerant Plants for Your Garden?

Keep in mind that a plant that’s drought-tolerant in one region may not be in another, so always check whether a plant is recommended for your area before adding to your garden. Plants native to your region will be well-suited, but you can also look into plants from regions with similar climate and weather.

Yes, succulents are drought-tolerant plants. Their leaves and stems are designed to store water from infrequent rain and to avoid losing water to transpiration. Often the biggest mistake in caring for succulents is to water them too much or to plant them in soil that keeps too much moisture. Succulents like their soil to dry out between watering’s.