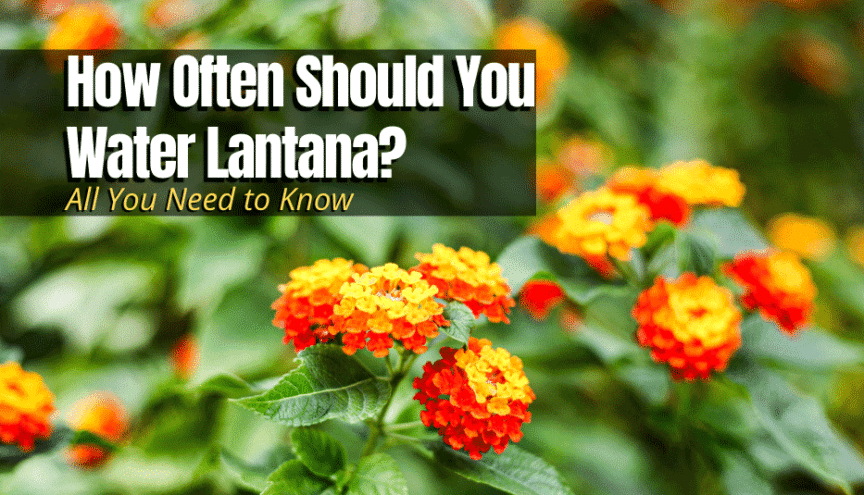 The beautiful lantana is an evergreen shrub or perennial that is occasionally grown as an annual. The plant is admired because of its blooms and clusters. Because of its different growth habits, the numerous species and cultivars of this heat-tolerant plant are suitable for a variety of applications.

Planting lantanas for the first time will require you to water more regularly until the plant has a good root system. You can do this on a daily or every other day basis initially to ensure a strong root system is established. Don’t overwater as this can damage the root system.

How to Tell if Lantana Needs Water?

Since lantana has pretty different watering needs based on where it’s planted, you’re going to have to test the soil using your finger. It appears to be straightforward, and it is. In contrast to lantanas growing in the ground, plants that are in containers and hanging baskets do not benefit from a protective layer of soil.

Container plants require more regular irrigation than those planted in the ground since their roots are more exposed to the elements and evaporation as a result. Because of the limited soil area available to hold moisture and the restriction of the roots, they are unable to seek out additional moisture in the surrounding soil.

Watering lantanas can be determined by using the finger test to check for moisture levels, which is quite accurate. If the dirt feels dry when you press the surface, it’s time to add some moisture to it.

This may happen every two days or even every day in hot, arid places, depending on the weather. Plants can survive with only twice-weekly watering in areas with high humidity.

How Do You Know When Your Lantana is Sufficiently Watered? 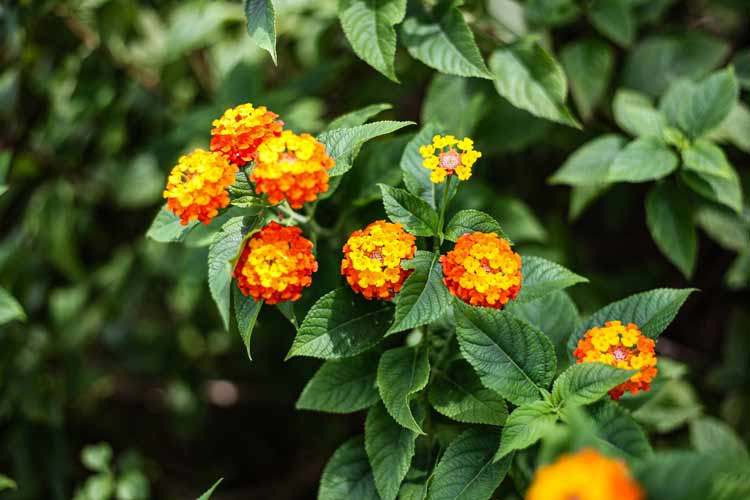 Knowing when the lantana has received enough water can be a bit tricky because plants in different growth stages will have different water requirements.

For example, lantana that has been recently planted will need help to get the roots established. At this stage in its life cycle, you should never allow the soil to go dry. Add water slowly to allow the roots to absorb it. When the roots are established, you won’t need to water them as often.

Thriving lantana is pretty tolerant of drought. When grown and established, the plant typically needs about one inch of water per week.

When dealing with hot summers, you might have to water the lantana more often. You should water it about twice or three times per week but always check the soil to see if it dries out between waterings.

Can You Overwater Lantana?

Yes, much like every other plant out there, lantana can suffer due to overwatering. Even if the plant requires a fair share of water until its roots are established, a grown plant is pretty drought tolerant, so it’s best to avoid adding too much water to prevent other potential plant problems.

What are the Signs of an Overwatered Lantana?

Lantana that has been overwatered is not only an unsightly sight, but it is also frail and susceptible to disease. As a result, a little tender loving care and prudence are essential for their survival.

Signs of withering include limp stalks and drooping leaves, among other things. Lantana leaves may curl up and become yellow if they are exposed to too much water. They can develop light brown or white patches at the tips of their nails.

The growth is stunted or delayed, as the blooms are slow to appear, and the buds do not fully mature. Mold or fungal growth can also be seen on stems, leaves, and soil, among other places.

How Long Can a Lantana Go Without Water?

It is not quite clear how long lantana can go without water, but we do know that an established plant can resist in the face of drought. After having developed an established root system, you can water the lantana about one inch per week.

Why is Lantana Turning Brown/Yellow? 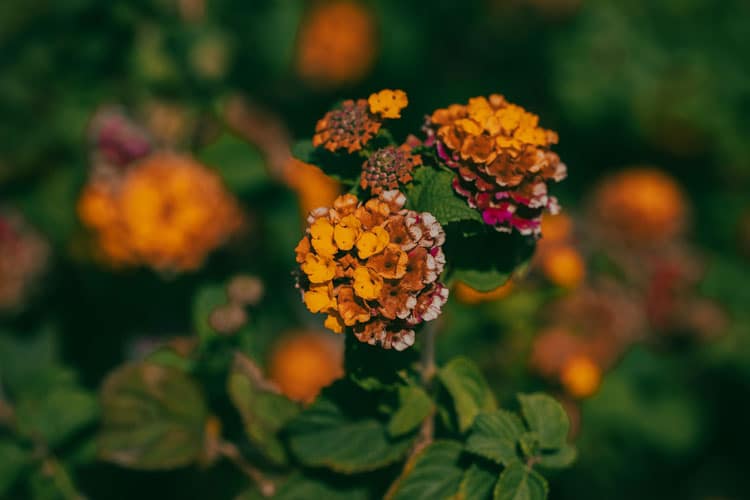 Lantana with yellow leaves may be anticipating winter. When grown in a warm, frost-free region, lantana is a perennial flowering shrub. The plant grows as an annual or needs to be overwintered indoors in all other environments.

Changing the color of lantana leaves to yellow can potentially indicate the presence of a dangerous disease, such as botrytis blight, often known as gray mold.

This occurs in humid climates and results in the yellowing of lantana leaves and the wilting of the flowers. The use of overhead irrigation may exacerbate the situation if you do not take preventative measures.

Why is My Lantana Droopy?

Lantana plants could be wilting for a variety of reasons. Pests are a common problem that could result in the lantana plant eventually dying. Whiteflies are pretty common but so are leaf miners.

Droopy plants could also be a result of different fungal diseases. That includes rust fungus and botrytis blight. This usually occurs when the plant is exposed to high temperatures and excess moisture.

Fertilizer isn’t necessary unless your soil is extremely deficient. Lantana, in this instance, benefits from mild fertilizing in the early spring. Only lantana cultivated in pots is exempt from this rule since plants grown in containers are unable to extract nutrients from the surrounding soil.

Lantana plants grown in pots require regular fertilizer because any nutrients contained in the potting mix are quickly exhausted by the plant. Spring fertilization should be done using a slow-release fertilizer. After that, just apply a water-soluble fertilizer once every two to four weeks.

How Much Sunlight Does Lantana Need? 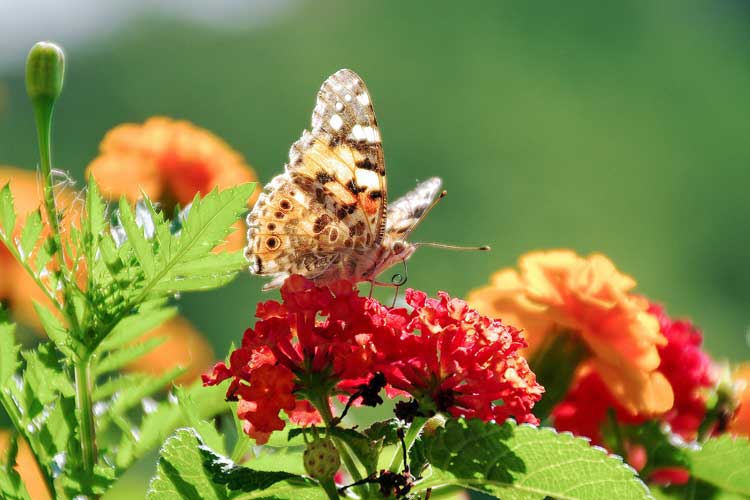 If you want lantana to grow big, strong, and have beautiful flowers, it needs at least six hours of full sun every day. Indeed, the plant can also grow in shaded locations, but this will cause a drop in the number of flowers.

Will Lantana Survive in the Winter?

After being established, lantana is extremely drought tolerant, however, they are unable to withstand prolonged periods of freezing temperatures. Once the first frost arrives, they are doomed. They hibernate in warmer climates when the weather cools.

Will Lantana Survive in Direct Sunlight?

Yes, lantana is a plant that loves being in full sun. if you want to enjoy its beautiful flowers, it’s recommended that you leave the plant exposed to the direct sun for a minimum of six hours per day.

Will Lantana Come Back After a Freeze?

While lantana can tolerate a light frost, it will never survive temperatures that drop under 28 degrees Fahrenheit. If planted in hardiness zones 8 to 11, the plant will come back to life come next spring. If you planted lantana outdoors, a layer of mulch over the plants should keep them more protected.

It’s important to remember that the lantana is only pretentious with its water until its roots are established. Once it develops a healthy root system, it has a pretty high tolerance to drought. However, the blooms will be affected if the plant is left for long periods without any water.