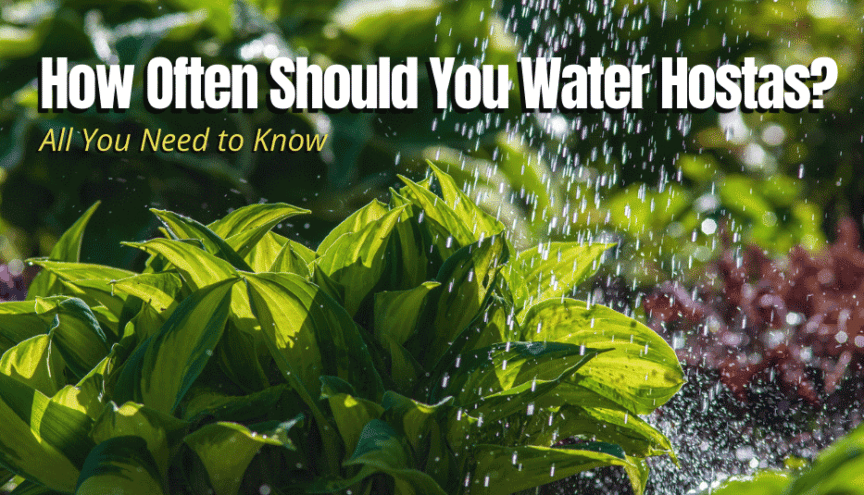 Hostas are shade-tolerant perennial plants that are exceptionally tough, low maintenance, and can grow beautiful and healthy with the proper watering schedule. They do not enjoy being planted in a deeply rooted region, particularly one with a large number of surface roots from trees, because they will have to compete for nutrients and moisture.

The hosta evaporates a significant amount of water as a result of its big leaves. It is for this reason that it requires continual water replenishment. You can water this plant with one to three gallons of water, depending on its size and growth stage. When the plant is established, you can water it once a week.

How to Tell if Hostas Needs Water?

You can tell your hostas need to be watered by looking at their leaves, which should be drooping or wilting. It is necessary to boost watering if you notice brown margins on the leaves of your plant since it is suffering from drought stress. Hostas require water if the soil is dry when a finger is pressed into it an inch below the surface of the soil.

How Do You Know When Your Hostas is Sufficiently Watered? 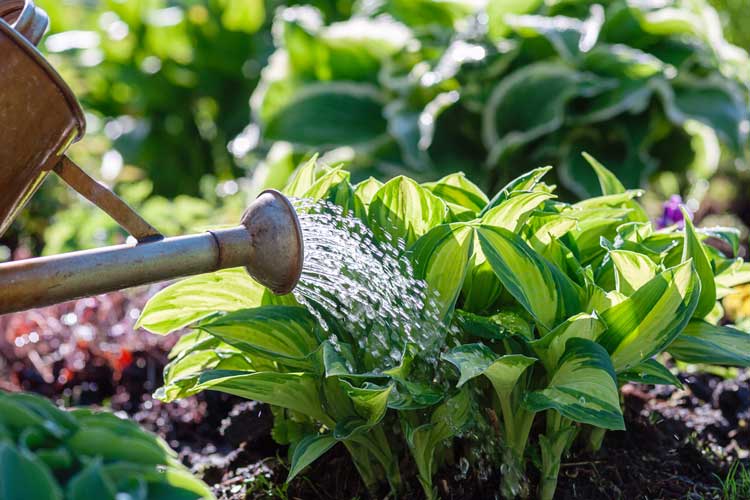 Rather than watering the leaves of the plant, it is preferable to irrigate the root system of the plant. Slow, thorough watering of the soil encourages the development of deep roots. Hostas that have just been planted will require daily watering for the first two weeks.

As soon as they are established, little or medium-sized plants will require a thorough soak once a week. Hostas are drought resilient, but they like moist, well-drained soil to thrive in. If the weather is particularly hot, watering should be increased to three times per week.

Hostas grown in containers will require more frequent watering than those grown in the ground. Because containers drain more quickly than garden spaces, it can be difficult to provide the plant with the slow-release water it requires.

Can You Overwater Hostas?

It is possible to overwater hostas. Even more likely is that they have been planted in soil that holds an excessive amount of moisture.

Hostas prefer their soil to be evenly moist, but they don’t appreciate standing water in their beds. If they’re kept in moist soil for an extended period, they’re likely to suffer from root rot, which will eventually kill them.

Make certain to use an organic and well-draining mix and avoid allowing the area surrounding your hostas to become waterlogged or muddy at any time.

What are Signs of Overwatered Hostas?

Aside from being overwatered, these plants are likely to wilt if they are planted in soil that is not well-drained.

The leaves of hostas will turn yellow and droop if they are watered too frequently. Because overwatering can cause root rot and a variety of other fungal diseases, it is important not to overwater your hostas.

How Long Can a Hostas Go Without Water? 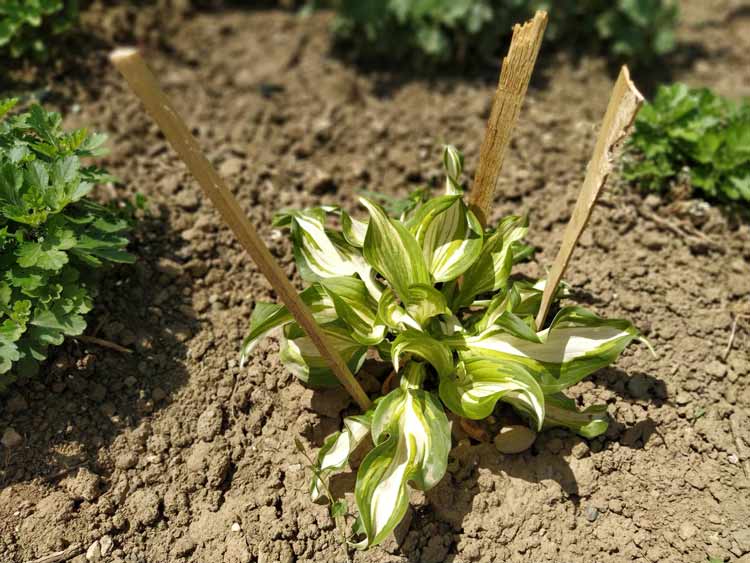 This year’s dry weather has resulted in brown foliage and dormant plants in the near term. To comprehend how drought would influence the hostas in the long run, we must first grasp the life cycle of a hosta plant.

When a hosta emerges in the spring, it is doing so on the backs of the food and energy reserves that the plant had saved in its rhizome during the late summer and fall of the previous year. After receiving adequate water in late summer and fall, the hosta should grow into a larger plant the following spring because it was able to store more energy than it consumed.

A hosta, on the other hand, that does not receive appropriate moisture in the late summer and fall will not be able to accumulate the energy stores that it requires to grow in size.

As a result, the hosta that emerges the next spring is far smaller compared to its size in the previous year. A plant that declines in size from one year to the next is frequently the result of a particularly dry summer and fall.

Having several unusually dry summers in a row can be particularly damaging to hostas, which are unable to recover their depleted energy supplies.

Should Hostas Soil Be Moist?

Hostas are drought resilient, but they like moist, well-drained soil to thrive in. If the weather is particularly hot, watering should be increased to three times per week.

In hot weather, large hostas need to be watered twice a week, and even more frequently during the summer when they receive more sun. Hostas grown in containers will require more frequent watering than those grown in the ground.

Why is Hostas Turning Brown/Yellow?

There are so many reasons why the leaves on your hosta can turn yellow. One such cause is potential pests threatening the plant. A group of tiny worms called “foliar nematodes” live inside the leaves of plants.

When yellow hosta leaves signal the presence of disease, the options for treating the condition become more limited. When you notice yellowing leaves on a hosta, the plant may be suffering from petiole rot.

Yellow leaves could also be a sign that the plant has received too much sunlight, it is perhaps the simplest condition to correct. Hostas are plants that thrive in partial shade, if not complete shade, and even full shade.

On the contrary, they are permanent fixtures in the shade garden. If you grow hostas in full sun, you might expect to see yellow hosta leaves on the plants. The foliage becomes yellow and scorches at the edges as the season progresses.

Why is My Hosta Droopy? 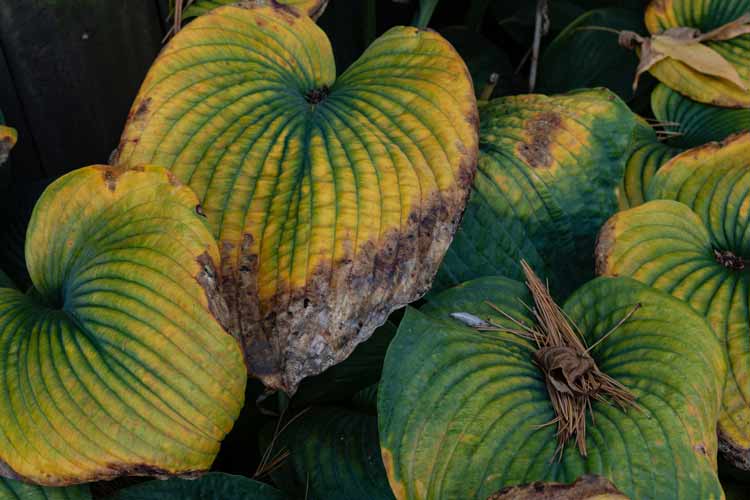 Hostas usually go droopy when being overwatered. However, there are other problems with the plant that could trigger wilting. One such example is underwatering.

Plants grown in containers dry up much more quickly than those grown in the ground, so they may require watering every day or every other day throughout the summer months. If your plants have become wilted as a result of the dry weather, they may only a little extra water or mulch to help keep moisture in the soil.

If the soil in your location is poor, you can improve it by adding compost to it on an annual basis. This will increase the levels of nitrogen, potassium, and phosphorus in the soil, all of which are necessary for a garden-rich soil. The use of organic waste also aids in drainage issues.

For those of you who just planted their hostas, it’s a good idea to use slow-release fertilizer in the spring. When the plant is established, you can switch to 10-10-10 granular fertilizer and sprinkle it around the base.

How Much Sunlight Does Hosta Need?

Hostas are well-known for their ability to brighten shaded areas while also bringing color and texture to difficult-to-grow areas in the garden.

While hostas are commonly referred to as “shade-tolerant” plants, which means that they will thrive in shadow or partial shade, some cultivars are tolerant of partial sunlight when grown in a sunny location. A few cultivars benefit from periods of sun exposure to maintain their foliage’s brightness and color.

Will Hostas Survive in the Winter?

Come winter, hostas go dormant and do not require any more irrigation. Water the in-ground plant abundantly once a month throughout the fall months before the arrival of winter weather.

This will assist in preparing hostas for the dormant months of the winter. If you are experiencing regular precipitation, you do not need to complete this step. During the winter, a potted hosta will require watering on a few different occasions.

Will Hostas Survive in Direct Sunlight?

Typically, no. Hostas are plants that don’t do well when exposed to direct sunlight because it burns the leaves. Instead, you want hostas to benefit from morning sun exposure and afternoon shade. This is true in most cases, but not for all varieties.

Watering hostas also depend on whether they’re planted outside or in containers. Plants that groped in containers might need more frequent watering, even once every two days during hot summer days.