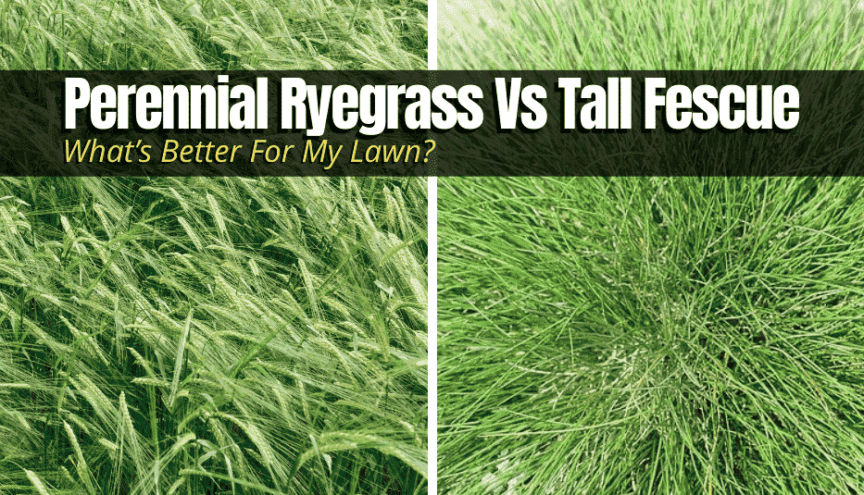 While we may be tempted to just grab a bag of seed off the hardware store’s shelf, taking time to choose the right grass species for your cool-season or transition zone lawn can save you time, money, and hassle. Perennial Ryegrass and Tall Fescue are both great choices with many similarities but key differences that could make or break your lawn. Find out which grass is better for your lawn.

What Are Perennial Ryegrass And Tall Fescue?

What Is Perennial Ryegrass? 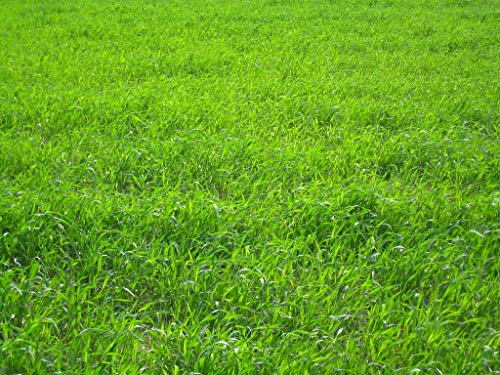 Perennial Ryegrass is a beautiful, fine-textured grass that could give any lawn a run for its money with half the work. It can withstand heavy foot traffic and is not fussy about compacted soil. It’s also a handy erosion-control grass for embankments and slopes, as it germinates really quickly.

It grows in clumps, which means you won’t have to worry about thatch, but your lawn may look rather thin and it’s not as even as a rhizomatic grass for playing ball games on. Its clump growth opens up more opportunities for weeds, but it grows more aggressively than other cool-season grasses. In fact, it’ll even outcompete the rhizomatous Kentucky Bluegrass. It can handle light shade, but really prefers full sun.

Make sure that you’re getting Lolium perenne (Perennial Ryegrass) and not Lolium multiflorum (Annual Ryegrass). Annual ryegrass is cheaper than perennial, and thus is used to pad out cheap seed mixes, but it only lasts the one growing season before it dies off. A Perennial Ryegrass lawn will last you many years. (If you’re in a warm-season zone and looking for winter green, then you need to go with the annual as its root structure won’t compete with your existing grass.)

Like most grasses, Tall Fescue began as pasture grass before making the leap to turfgrass in the mid-1900s because of its high tolerance of heat, cold, and drought while remaining low maintenance. You’ll find Tall Fescue often referred to as “Turf-Type Tall Fescue” or “TTTF” to distinguish it from pasture fescue.

Tall Fescue’s clump-forming growth habit can make your lawn look thin and uneven, but you can compensate by using other rhizomatous Fescue varieties like creeping red fescue, chewings fescue, or the more recently cultivated Rhizomatous Tall Fescue (RTF), or even with the higher maintenance Kentucky Bluegrass. If you like to walk barefoot or have kids playing on it, you may wish to look for newer cultivars with finer textures.

Which Is Better: Perennial Ryegrass Or Tall Fescue?

Perennial Ryegrass features a beautiful medium-green color and fine texture. Tall Fescue has a coarser texture and can vary from medium to dark green. Newer cultivars have a finer texture that’s nicer on the skin if walking on your lawn or kids playing on it is a priority. Both create a fine-looking lawn with low maintenance.

Both Perennial Ryegrass and Tall Fescue grow in clumps, meaning that your lawn may look uneven, develop gaps, or thin out. Your lawn will also be more prone to weeds. You’ll either need to overseed each year to fix damage and create a thicker lawn, or choose a mix or blend with rhizomatous species like Rhizomatous Tall Fescue, red fescue, or chewings fescue.

They both also get established fast once they’re germinated, reducing the time you need to nurture your burgeoning lawn and fend off weeds. Perennial Ryegrass germinates quickly between 5 – 10 days, while Tall Fescue takes longer at 14 – 21 days. Because of its fast germination and establishment rate, Perennial Ryegrass is a great choice for slopes and embankments that are difficult to seed and you need to cover them quickly. 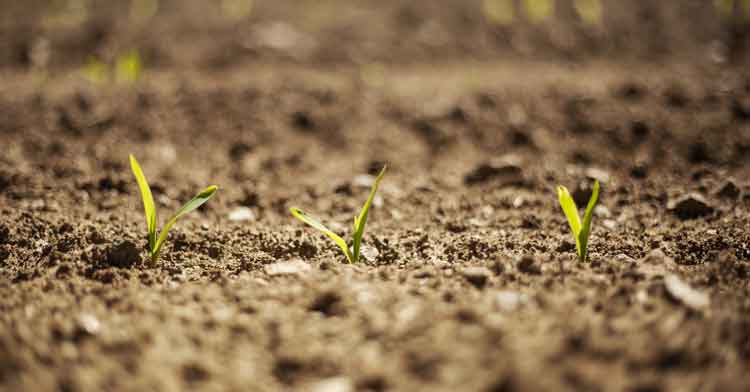 Perennial Ryegrass prefers loam-clay soil. It doesn’t mind compaction as much as other grasses, which is very helpful as high traffic often comes with more compaction. It prefers acidic to slightly alkaline soils.

Tall Fescue will do well in just about every soil you throw at it and tolerates most pH levels from acidic to alkaline. If you’ve struggled to grow grass with your soil type before, Tall Fescue could be the answer.

Both Perennial Ryegrass and Tall Fescue are cold-season grasses (short summers, cold winters), and you can grow both as far south as Zone 9, making them both candidates for transition zones (long hot summers and cold winters) depending on your specific conditions.

If you have a warm-season lawn and are looking to overseed for winter color, then go with an Annual Ryegrass.

Perennial Ryegrass loves Full Sun and can tolerate a little shade. It can do well planted under deciduous trees before and after the trees grow their leaves, although it’ll suffer during the summer when the trees more heavily shade the area.

Tall Fescue can thrive in both Full Sun and Part Sun conditions, needing only 4 hours of sun per day. It’s a good choice if your lawn gets shaded during part of the day.

For both, if you’re in a transition zone with long hot and humid summers, planting them underneath partial shade (especially shade in the afternoon) will help them weather the summer heat better. 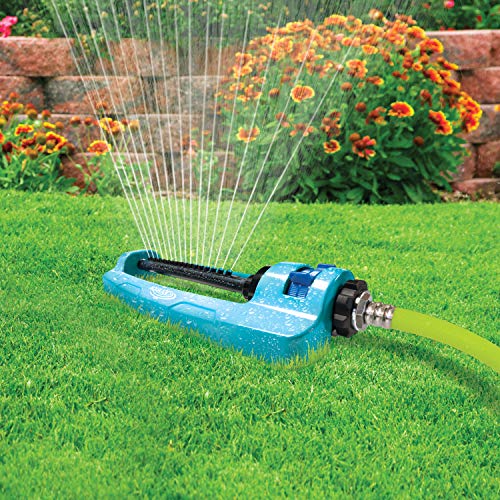 Tall Fescue’s deep roots make it especially drought-hardy and makes a great choice for areas with low rainfall or non-irrigated lawns. Because of its deep roots, it does better with soil that’s deeper than six inches. If you’re living in a new house or in a new development, this might be a problem as development companies tend to leave behind thin layers of topsoil over compacted earth. To get Tall Fescue’s drought hardiness and high resilience, you may need to break up the compacted soil with a rototill or [purchase topsoil (a great opportunity to add more compost that will help for years!). It’s a lot more work, but you’ll benefit in the end.

Perennial Ryegrass is less drought-hardy because of its shallow roots. It needs more water and is better for areas with normal rainfall or occasional waterings.

Water both deeply and less frequently to encourage their roots to grow deeper, which will help your grass become more resilient to drought and other stresses. If you have sandy soil, then you’ll need to water more frequently and more shallowly as water drains away too quickly.

Both Perennial Ryegrass and Tall Fescue lawns will be prone to weeds, as they both have a clump-forming growth habit that leaves gaps open for weeds to take advantage of. Perennial Ryegrass may have an advantage, since it can outcompete other plants better than Tall Fescue can. For both, the key is a healthy lawn and overseeding to fill in gaps and create less space for weeds to grow.

Both Perennial Ryegrass and Tall Fescue have the same fertilizer needs and schedules. They need around 2 – 3 lbs of nitrogen per 1,000 sq ft per year. The best times to fertilize are in the early spring and in the fall when these cold-season grasses are growing more vigorously. Depending on your soil conditions, you may only need to apply compost once per year (in the fall) to give it all the nutrients it needs for the coming year.

While most grasses can benefit from using organic fertilizers like compost over synthetic, they’re both prime candidates for an organic lawn that results in a healthier lawn with less work in the long run.

Neither Perennial Ryegrass and Tall Fescue are prone to thatch. That’s the advantage of clump-growing grasses – no stolons.

Unless your grass is struggling to grow in compacted soil, you will probably not need to aerate the soil either.

Both also resist dog urine better than Kentucky Bluegrass and the warm-season Bermuda.

How Do I Know If I Have Perennial Ryegrass Or Tall Fescue?

What Is The Best Grass Seed When You Have Dogs?

When you have dogs running about your lawn, you need a grass that can stand up to heavy use, resist dog urine, require only rare chemical treatments, and is safe for dogs to chew. Both Perennial Ryegrass and Tall Fescue are prime cool-season candidates, although Perennial Ryegrass can withstand heavier traffic than Tall Fescue. They resist dog urine better than Kentucky Bluegrass and Bermuda. Because of their high resistance to pests and disease and their low fertilizer needs, they’re safer for dogs to roll around on.

Can I Mix Perennial Ryegrass With Tall Fescue?

Because they’re so similar, it seems like a Perennial Ryegrass and Tall Fescue would work well together. But when studied, researchers found that these mixed lawns (including lawns with the more competitive Kentucky Bluegrass) ended up being dominated by Perennial Ryegrass. If you’d like a mix, it’s better to go with a Tall Fescue mixed with other fescues and/or Kentucky Bluegrass.