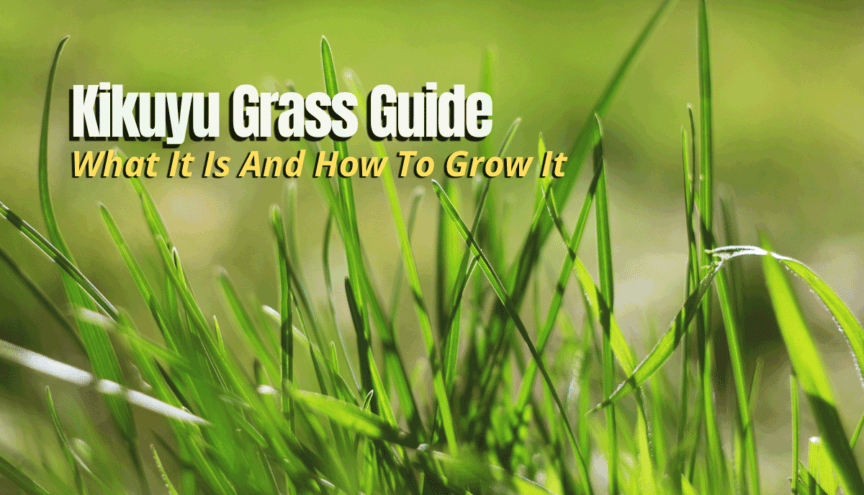 Either hailed as a dream grass or despised as an aggressively invasive weed, Kikuyu grass is controversial. While it grows densely, survives hot droughts, and is even budget-friendly, Kikuyu grass can also be terribly invasive in natural areas and garden beds and even suffocates other plants. Will Kikuyu be a dream or a nightmare for you? Read on to find out.

What Is Kikuyu (Pennisetum clandestinum)?

Originally coming from Eastern Africa, Kikuyu has become widely used in Australia, New Zealand, and Southern California both as a pasture grass and as a turfgrass because it withstands high heat and drought.

Kikuyu’s drought resistance comes from its deep root systems, which also doubles as erosion control on steep banks. In coastal and inland valleys, it doesn’t even go dormant during the cooler months. While it prefers nutrient-rich soil, Kikuyu can live happily with as little as 1 or 2 applications of nitrogen per year. During the summer heat (and when given more fertilizer), Kikuyu explodes into growth, recovering from damage quickly and spreading aggressively into a thick turf.

But that growth and low needs are also its major drawback – Kikuyu is invasive, both in your garden and in nature. It spreads through rhizomes, stolons, and seed, and forms a thick mat that crowds out other species, or grows over fences and shrubs. Kikuyu can also spread via mowers and renovation equipment when that equipment is used in other places. And it spreads quickly.

It’s actually very similar to Bermuda grass. They both have a special photosynthetic pathway that allows them to gather carbohydrates and grow quickly when exposed to intense light and warm temperatures – exactly the kind of conditions you get in summer Australia and Southern California. But unlike Bermuda grass, Kikuyu can continue to grow at lower temperatures and doesn’t need as much care. Low nitrogen levels, shade, and dry conditions will hold Bermuda back. Kikuyu has no such environmental restraints.

Once you get Kikuyu, it is extremely difficult to get rid of and keep at bay. Most controls available also affect the surrounding turf.

The cultivar Village Green is the least invasive, as it does not go to seed, but you can only start a Village Green lawn from sod, line planting, or stolons. Make sure whichever provider you buy it from supplies a certificate of authenticity.

It’s also not the most desirable in appearance for a turfgrass, with a bright green color and coarse texture. 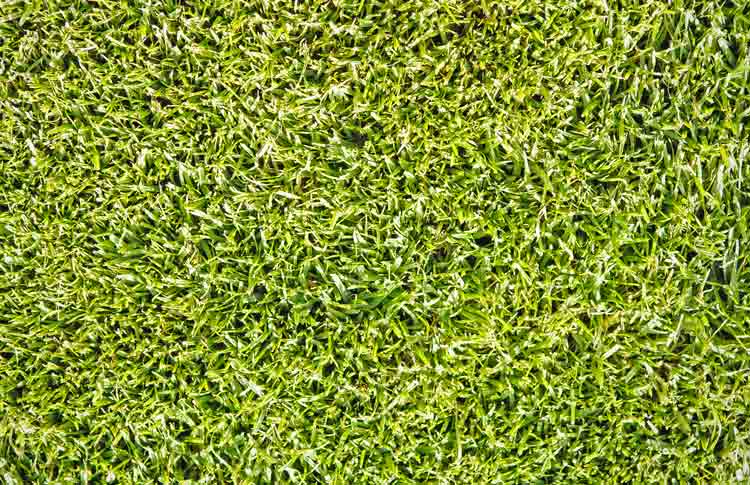 Pros and Cons of Kikuyu

How To Grow Kikuyu

The best time to start a new Kikuyu lawn is when soil temperatures are above 20C or 80F, especially if you plan to start by seed. The higher the temperature, the quicker the seed germination – but the soil needs to be kept moist (lightly covering the seeds helps). You can also use sod, line plantings, or plugs. Village Green is only available in these three forms.

Kikuyu takes 14 to 21 days to germinate, and 2 to 3 months to get established. Keep the soil moist during germination, but as the grass gets established, taper back watering to encourage it to grow its 3m (10ft) deep roots for increased drought tolerance.

You may also want to install garden edging that extends below the surface (30cm or 12 inches, although some have success with as short as 50mm) to help keep Kikuyu from spreading. Tilt the top edge away from the grass and the bottom edge closer to the grass. When rhizomes hit the barrier, they’ll grow upwards. Once they breach the surface and reach the top of the edging, you’ll be able to see them and cut them back. If you don’t, the rhizome may burrow deeper to invade your garden bed.

You need to mow your Kikuyu lawn. Left on its own, it grows as tall as 18 inches – and can smother ornamentals and shade out low shrubs. Keeping it mowed will help slow its spread, and keep it looking tidy.

Keep your mower blades sharp as blunt blades may tear the leaves instead of cut, especially the lower you go. Only cut off ⅓ of the leaf at a time. If you need to cut more, do a second mowing a couple days later.

Once every two weeks, go around the edge of your lawn to cut off any stolons that are creeping where they shouldn’t. Prevention will save you a lot of time and frustration, as once Kikuyu gets established, it’s extremely difficult to remove.

You have a few options for removing Kikuyu grass where it shouldn’t be, whether that’s in your existing lawn or garden beds, but all of them require persistence and diligence. Once established, you’re not getting rid of it in one go.

Removing the entire plant, roots and all, can be successful when there’s only one plant or before it establishes its deep roots.

Spot spraying glyphosate can also be effective, but glyphosate will also kill your grass or surrounding plants. Some pre-emergent herbicides have kept Kikuyu seeds from germinating when applied early enough in the season. Multiple applications of post-emergent herbicide may help control established plants.

While Kikuyu can smother other plants once established, having a thick turf or ground cover where you don’t want weeds or Kikuyu grass will help keep it from getting established.

Do not cultivate or hoe soil with a Kikuyu infestation. You’ll break up the rhizomes, making it spread further.

It’s best to keep nitrogen applications low, between 1 or 2 per year. That’s more than enough to maintain Kikuyu. Any more, and you’ll encourage growth – and it will spread out of control.

A low nitrogen, slow release fertilizer with trace elements like iron and manganese is best. Compost is great for this since it has low levels of nitrogen, its nutrients release slowly over months, and it contains a bit of every micronutrient plants need, not just the standard NPK.

If you’ve never had a soil test done for your lawn, get one done before fertilizing. A soil test will tell you which nutrients your soil lacks and which nutrients it has more than enough of. Phosphorus and potassium can both quickly build up in soil to noxious levels that are challenging to rectify. 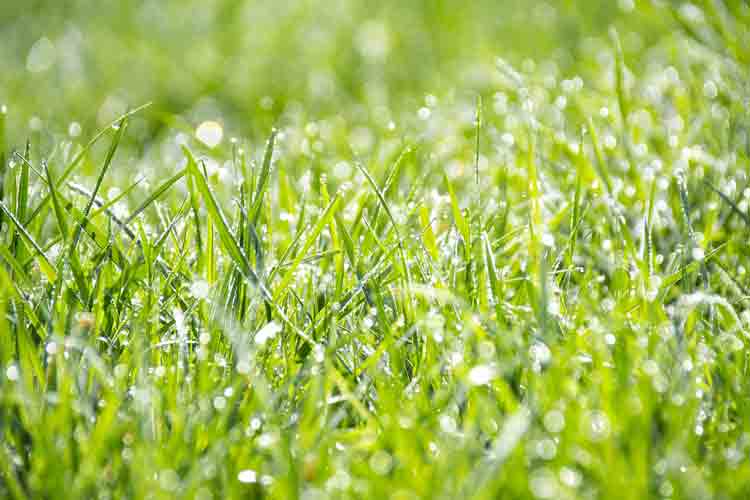 An established Kikuyu lawn should be able to withstand some dry periods. In the summer months, you may need to give your lawn a deep watering once every 7 to 10 days if you have loam or clay soil, or a shallow watering more often if you have sandy soil. Deep watering and letting the soil dry out in between will help with drought tolerance.

Instead of a schedule, water only when your grass begins to wilt, roll, or fold. Another sign it’s time to water is if you walk on the grass and your footprints remain. Watering only when necessary will prevent overwatering (causing root rot) and help keep the Kikuyu from growing out of control.

When dormant, you may not need to water it at all.

Kikuyu does well with reclaimed water, which helps keep your water bills low and allows you to water it during water restrictions.

If you have heavier soil, frequent use, heavy rainfall, or prolonged drought, then you may need to aerate your Kikuyu lawn. Using a core/plug aerator is usually best, since it pulls out part of the soil to open up space while spike aerators simply compact the soil around the spike. The best time to aerate Kikuyu is during the mid-to-late summer and outside of the rainy season.

Kikuyu is prone to thatch, since it’s an aggressive grower that spreads through rhizomes and stolons. Stolons take longer than other plant matter to decompose, so it builds up, especially when the grass is growing quickly. If you take steps to limit its growth (fertilizing minimally, watering only when needed, and mowing frequently), you’ll have more time for the plant matter to decompose.

Only dethatch when thatch builds up above ½ inch or 12mm. A bit of thatch is beneficial, as it shades out weeds and keeps moisture in the soil from evaporating. If you dethatch, do so in mid-to-late summer.

You can dethatch by mowing Kikuyu as low to the ground as possible (scalping), then raking the lawn to remove as much plant material as possible.

What Happens To Kikuyu Grass In Winter?

What happens to Kikuyu grass in winter depends on your location. In coastal regions, where winters are milder, Kikuyu may stay green and continue to grow, albeit much slower. In places where temperatures drop below 10C or 50F, it may go dormant. It will stop growing and go dormant when touched by frost, but can recover.

What Is Kikuyu Grass Used For?

Kikuyu was first used in pastures for grazing, hay, or silage, but has since also been used for erosion control and as turfgrass in places with hot and dry summers.

Can Kikuyu Be Overwatered?

Yes, Kikuyu grass can be overwatered. With its 3 foot deep roots, Kikuyu does well in droughts and doesn’t need as much water as other lawns because it’s able to reach more moisture in the soil than grass with shorter roots. If water puddles on your lawn or the soil remains waterlogged for days or weeks, Kikuyu becomes susceptible to diseases and root rot. Watering only when the top two inches of soil is dry will also encourage it to spread its root to make it more drought tolerant.