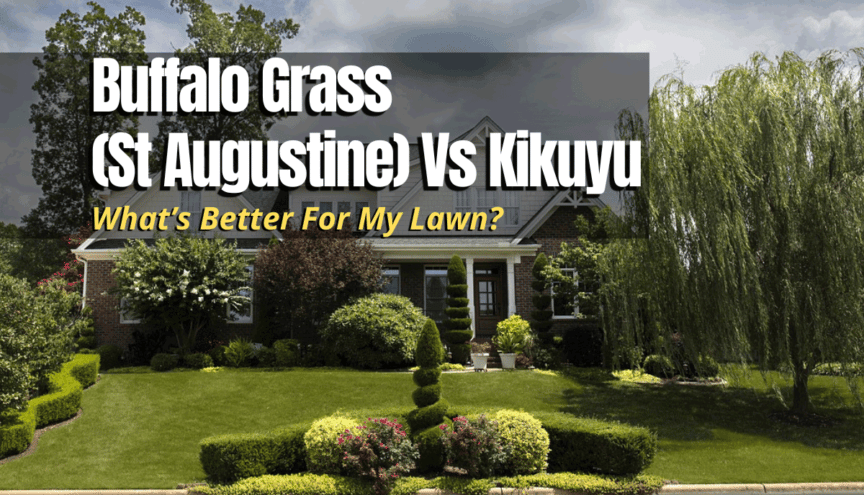 When you face high heat, extended dry periods, and other punishing conditions, picking the right turfgrass is essential. St Augustine and Kikuyu are the two most popular turfgrasses in Australia, but since they both have their advantages and disadvantages, which is right for your lawn? Read on to find out.

What Are St Augustine And Kikuyu?

What Is St Augustine (Buffalo Grass)?

If you live in southern Australia, you probably know this grass – and you probably don’t call it St Augustine. It’s more commonly known as Buffalo Grass. (Not to be confused with the low-maintenance, native North American Buffalo Grass (Buchloe dactyloides).)

St Augustine can have a lot of problems. It has very low cold and drought tolerance, and it’s susceptible to many diseases, many of which have no effective treatments. Look for newer cultivars, as they may have better disease and drought resistance.

The two most popular cultivars in Australia are ‘Sir Walter’ and ‘Palmetto’. Where St Augustine Decline is an issue, go for a SAD-resistant variety like Floratum, Floralawn, Raleigh, and Seville.

However, it is considered an environmental weed in Victoria, Western Australia, New South Wales, South Australia, and south-eastern Queensland.

Learn more about St Augustine with our complete guide. 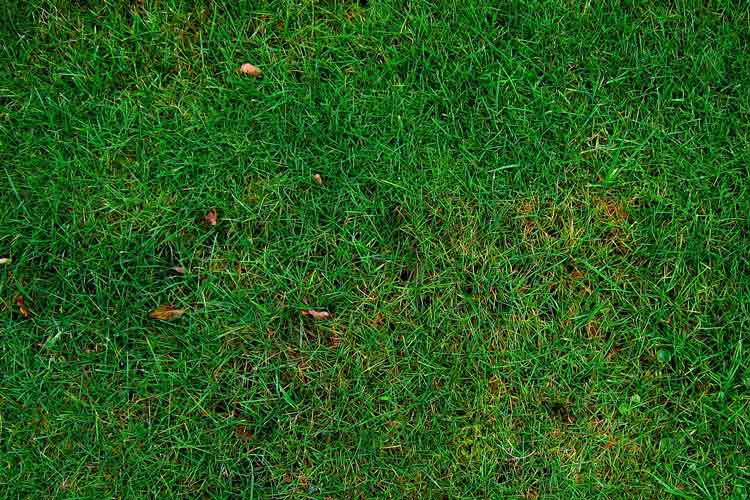 Kikuyu is another warm-season grass that is widely used in Australia, New Zealand, and Southern California, but unlike St Augustine, it grows 3m deep roots that give it great drought tolerance. Kikuyu has more in common with Bermuda grass, because, when exposed to intense and warm temperatures, they explode into growth, forming a thick mat.

That explosive growth is actually Kikuyu’s major drawback – it becomes an invasive weed that is near impossible to remove. It spreads by rhizomes, stolons, and seeds. When it escapes the lawn, it can grow thick enough to suffocate ornamentals and even small shrubs. If you even leave a bit of rhizome behind, it will grow back. The cultivar Village Green is considered the least invasive, because it grows slower and does not go to seed.

If you choose Kikuyu for your lawn, keep inputs like fertilizer and water to a minimum. It doesn’t need too much, and the lack of resources will constrain its growth. You’ll still have a lush lawn, just not one that’s as actively trying to invade your neighborhood.

When grown in coastal regions or some inland valleys, Kikuyu stays green during the winter. With cooler temperatures, it’ll go dormant for the winter. It recovers well from frost.

Learn more about Kikuyu with our complete guide.

Which Is Better: St Augustine Or Kikuyu?

Both St Augustine and Kikuyu have a coarse texture that feels unpleasant underfoot, and they both grow into thick mats of uniform turfgrass. St Augustine is a darker green or blue-green, while Kikuyu is a bright green. Darker greens are usually more desirable in turfgrass.

Both will stay green through the winter in areas where the temperature doesn’t dip too low, but go dormant under cooler temperatures.

If you want to start a new St Augustine, your choices are between sod, plug, or line planting. There’s no seed commercially available as the germination rate is pretty terrible.

You can get Kikuyu seed, but if you want Village Green, then you’re also limited with sod, plug, or line planting. Make sure that you get a certificate of authenticity from your provider to ensure that it’s the real deal.

Kikuyu’s germination time is on the longer end, needing 14 to 21 days, but once germinated or planted, it spreads and establishes itself in only 2 to 3 months. Because it’s so aggressive and invasive, you may want to install garden edging that extends 30cm or 12 inches below the surface, with the top edge angled away from the lawn. That way, when the rhizomes hit the barrier, they grow up and breach the surface, where you can spot the runaway rhizomes and cut them off before they escape.

St Augustine establishes itself more slowly, taking longer to get to that thick turfgrass, but on the plus side, it’s not nearly as invasive as Kikuyu.

St Augustine does best in sandy-silt soil, but will also do well in other sandy or loam soils. Clay-based soils may be too heavy for its short roots to break up, you may need to core aerate frequently.

Kikuyu does well in any type of soil, so long as it’s well-draining. If water sits too long, it can cause root rot or Yellows Disease.

They both have a similar range for pH, but St Augustine can handle more acidic soil than Kikuyu can.

Both grasses do well in subtropical regions where winters are mild. St Augustine may be hard pressed to make it through a freeze, but Kikuyu recovers well.

They both love the sun, but both can be grown in part shade as well. The part shade will curb Kikuyu’s aggressive growth, but if the shade prevents the soil from drying, then the moisture may cause root rot. They both need at least 4 – 6 hours of sun per day.

Both St Augustine and Kikuyu are susceptible to most common fungal diseases, including brown patch, gray leaf spot, and large patch.

In moist climates, Kikuyu is most susceptible to Kikuyu Yellows Disease, a fungal disease caused by Verrucalvus flavofaciens. When the soil is waterlogged for a long time (like after a long period of rain or heavy irrigation), this fungus attacks the roots, causing root rot and the grass to turn yellow. There is no effective treatment available for home use, but try to improve drainage in compacted lawns to prevent the soil from becoming waterlogged and hope for sunny weather to dry up the lawn.

St Augustine Decline (SAD), a virus that causes chlorotic mottling or stippling, plagues St Augustine lawns especially in Texas and other parts of the US. It’s easily confused with iron chlorosis, but SAD appears first in older leaves while iron chlorosis appears in newer ones. There are no effective controls. Once the grass contracts SAD, the grass weakens, and environmental stresses (like cold) can wipe it out. Look for SAD resistant varieties like Floratum, Floralawn, Raleigh, and Seville. If SAD has already infected your lawn, you can plant plugs for one of these varieties into your existing lawn. The resistant grass will take over.

Both diseases will thin your lawn as sickened grass dies off and weeds will take over the lawn. 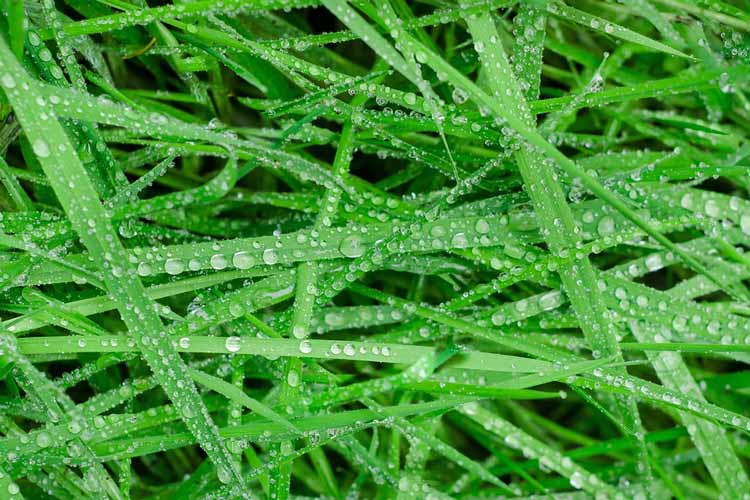 St Augustine needs water frequently. If you’re living in a place with low rainfall and/or frequent water restrictions, give this one a miss. Some newer cultivars have more drought resistance, but still need to be watered weekly. Check out the similar-looking Centipede Grass for a low water grass.

Kikuyu can grow well on lower amounts of water, and with its deep roots, is drought tolerant. As your lawn gets established, taper back watering to encourage it to dig its roots deep and increase its drought tolerance. Once you’ve tapered back, only water when necessary rather than on a set schedule. Keeping water low will help keep its growth under control. If you get rainfall, don’t water.

The best defense against weeds is a thick, healthy turfgrass, and both grasses grow thick enough to keep out the competition. (Kikuyu, in fact, can smother your ornamental garden if allowed to invade, so most weeds are no match for it.) When St Augustine suffers, it’ll grow thinner, and its stolons can look weedy. Avoid using herbicides with 2,4-D on St Augustine lawns, as this species is vulnerable.

Kikuyu may become your most invasive weed yet, especially if you can’t control its inputs. Add garden edging around your lawn to cut off rhizomes (as mentioned above in the establishment section, angle it so the top is away from the lawn), and go around your lawn once a week to cut off any escaping stolons or rhizomes that breach the surface.

If you catch a Kikuyu infestation early, you can stop it by removing the entire plant (roots and all). Do not cultivate or hoe the soil – you’ll break up the rhizomes, and each piece will grow into a new plant.

St Augustine has higher fertilizer needs than Kikuyu grass does. Depending on the cultivar, St Augustine may need 3, 4, or even 5 applications of fertilizer per year.

Kikuyu only needs 1 or 2 fertilizer applications per year, and if you give it more, it’ll respond with aggressive growth. Use a low nitrogen, slow release fertilizer that contains trace elements. Compost is perfect for this.

Both St Augustine and Kikuyu are prone to thatch and may need to be aerated if your soil becomes compacted.

How Can I Tell If My Lawn Is Buffalo or Kikuyu?

Buffalo (St Augustine) and Kikuyu look very similar, as they both have a flattened leaf sheath, a fringe of hairs on the ligules, and no auricles. They both spread by stolons and form a thick mat of turfgrass. The differences start with color: St Augustine is a medium green or blue-green, while Kikuyu is a bright green. St Augustine has wide, boat shaped tips while Kikuyu has slimmer, tapering leaf blades. Kikuyu also has rhizomes.

Is Kikuyu The Same As Buffalo Grass?

No, Kikuyu grass (Pennisetum clandestinum) is not the same as Buffalo Grass/St Augustine (Stenotaphrum secundatum) or Buffalo Grass (Buchloe dactyloides). They are completely different grass species. Kikuyu grass is a warm-season, drought-tolerant grass that grows aggressively by stolons, rhizomes, and seed. Buffalo/St Augustine is a warm-season grass with low drought tolerance that spreads slower by only stolons. Buffalo Grass is a transition-zone/warm-season grass with extremely high drought tolerance and a bunch-growing habit, spreading only by seed.

Yes, Kikuyu is a very aggressive grass that will overtake most grasses, including Buffalo (St Augustine). For that reason, Kikuyu cannot be mixed with any other grass species. If you find Kikuyu in your St Augustine lawn, you need to remove it before it gets established. That can be a difficult task, as they initially look very similar. Once established, Kikuyu is very difficult to remove, and will require multiple treatments of herbicides that St Augustine may be sensitive to. Kikuyu requires less water and fertilizer than St Augustine, so unlike other weeds, you can’t “starve” it out.