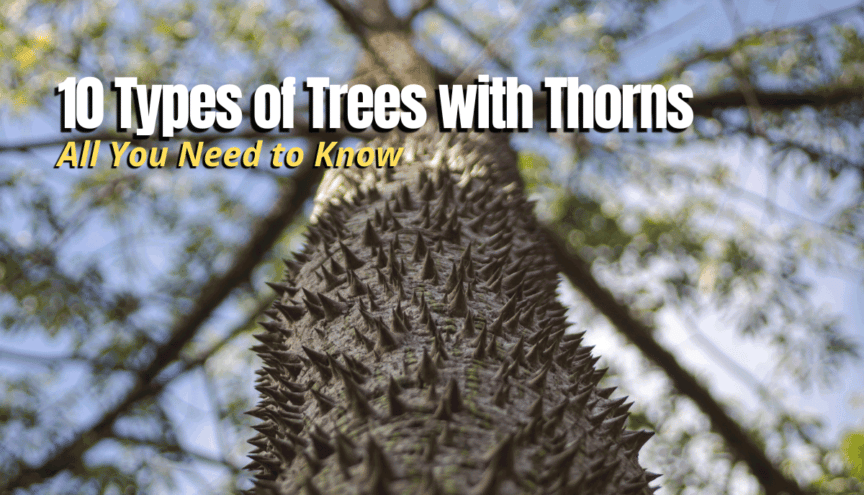 While at first glance you may think that trees with thorns would not be among the most attractive of species to grow, you may be surprised to discover that some of the most popular trees grown in North America have thorns. Find out which ones are best suited for your region!

What are Tree Thorns?

Tree thorns are shoots that instead of developing into twigs or branches, turn into sharp spikes. They evolved as a defense mechanism against herbivores who would otherwise consume the plant.

Thorns can serve a similar purpose on your own property; a thick hedge of thorny shrubs or trees, such as Hawthorn, can help deter animals or people from venturing into your yard.

What’s the Difference Between Tree Thorns, Prickles, and Spines?

Tree thorns are not the only sharp protuberances that can be found on trees.

Spines look very similar to thorns, but develop from leaf tissue rather than branches.

Prickles grow out of the outer bark or skin of a stem, and unlike thorns and spines have no vascular tissue. Interestingly, although we commonly refer to the sharp protuberances on rose stems as thorns, they are actually prickles.

Can Thorns on a Tree Be Poisonous?

10 Types of Trees with Thorns 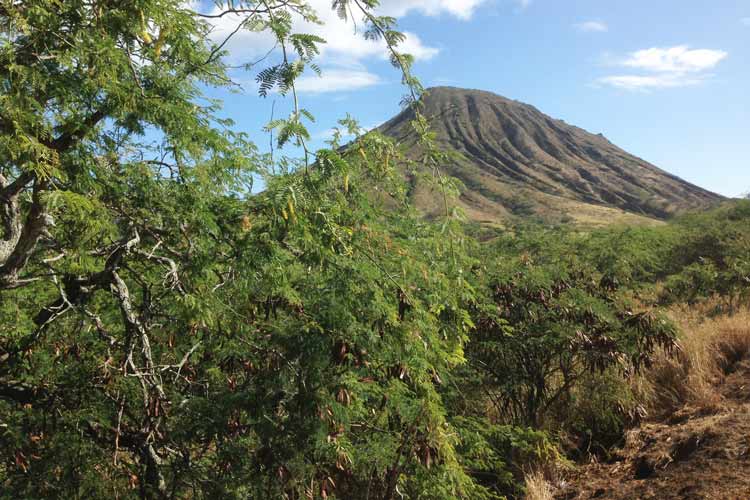 If you live in Zone 6 or above, you can grow a Mesquite tree.  They are, of course, most commonly grown in the arid regions of the South-west United States, which is their native range.

Mesquite trees have thorns that range in length from 2.5 – 5 cm (1 – 3 in), depending on the variety. Mesquites are members of the legume family of plants, and the long spikes of flowers develop into seed pods similar to beans.

Mesquites can grow in dry or normal conditions, making them suitable for planting in much of the United States. 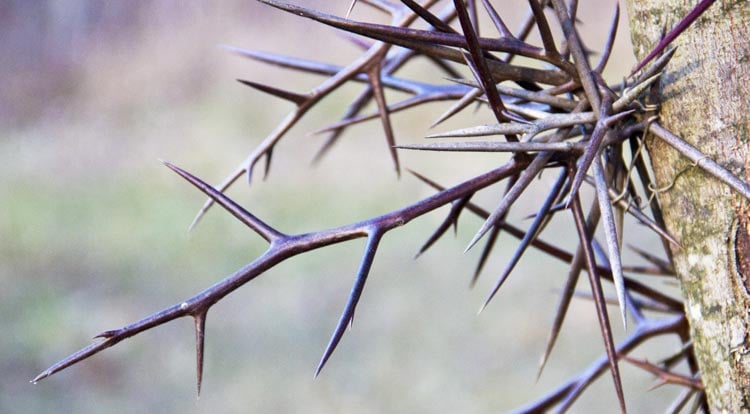 The Honey Locust tree is native to eastern North America, from the south shore of the Great Lakes as far south as Texas.

Wickedly sharp spikes up to 20 cm (8 in) long cover its trunk, making it a problematic choice for the average residential property.

However, there are thornless varieties that are popular landscape trees, such as the Sunburst Honey Locust. 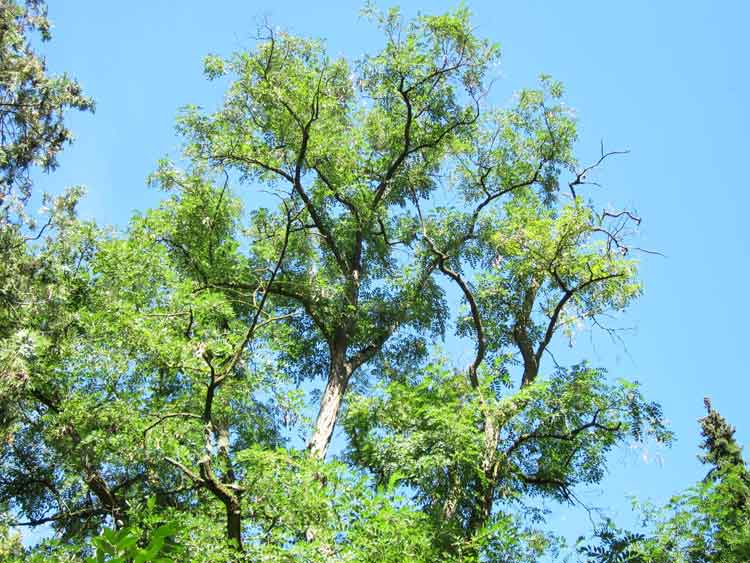 The Black Locust is another North American native that is found growing in Zones 3 to 9.

It has small, sharp thorns growing along its branches. In late spring the trees are loaded with clusters of sweet flowers, giving way to long pods of seeds similar to beans.

Black Locust trees can grow to more than 30 m (100 ft) in height, with a narrow spread. They are a bit messy when the seedpods drop, so you should find a spot where that will not be an issue. 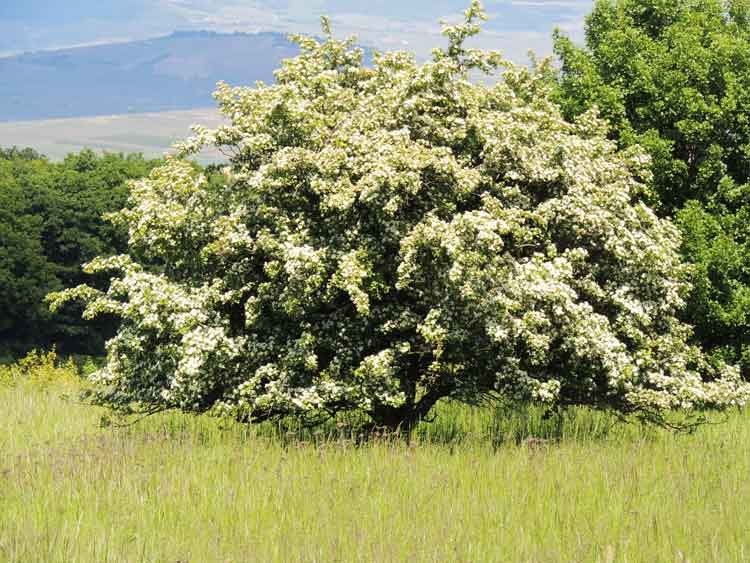 Hawthorn trees are native to both Europe and North America, and grow well in Zones 4 to 11.

They have small, sharp thorns along the branches, which have been known to cause serious injury. You are advised to wear gloves when working with these shrubs.

Hawthorn branches are covered with white, showy clusters of blossoms in late spring, making them a popular landscape shrub. In the autumn their leaves turn to bright purple, orange, or red.

While Hawthorns start out as shrubs, they can be pruned to grow into small trees up to 6 m (20 ft) tall. 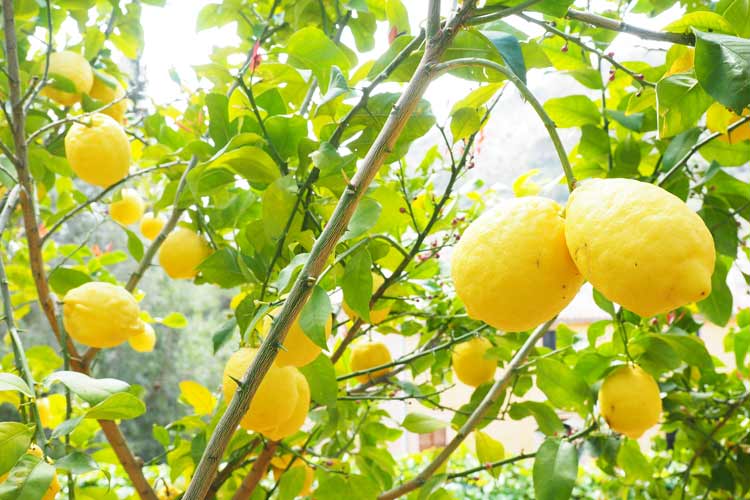 Most citrus trees have thorns, including orange, lemon, lime, and grapefruit. However, some new orange or lemon varieties have been bred to be thornless.

Thorns may only appear on young trees, disappearing as they mature. Their evolutionary purpose is to dissuade herbivores, and larger specimens would be less susceptible to damage.

If you live in Zones 8 to 11 and can grow citrus trees outdoors, you may choose to prune the thorns. They can pierce the fruit, damaging them and introducing bacteria. 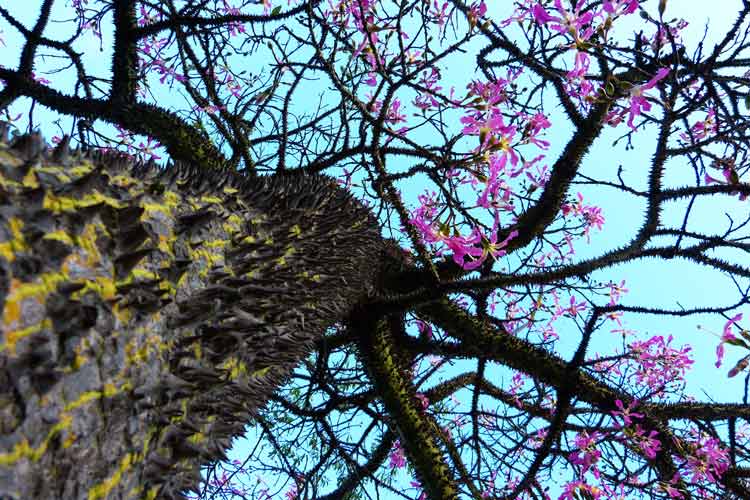 The Floss Silk Tree is a tropical tree that can be grown in Zones 9b to 11. Its green trunk and branches are covered with short, sharp, conical, grey prickles.

Its magnificent pink flowers make it a beautiful tree for a tropical landscape, but its mature size should be taken into account when planting a sapling. It can quickly grow to 25 m (82 ft), and should not be planted near roads or paths because of its sharp prickles. 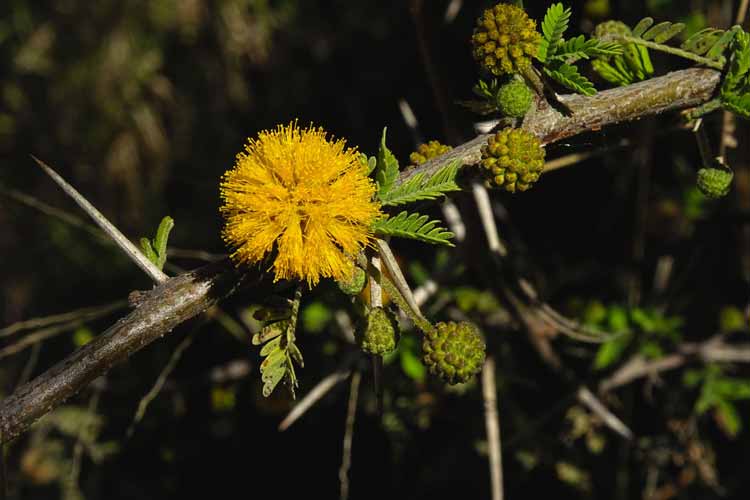 While most Acacia tree species are native to Australia, others can be found growing wild in the Americas, Asia, and Africa. Almost all are only winter hardy in Zones 8 to 11.

Native American species of Acacia have spines growing from the base of the leafstalks. Interestingly, not only do they deter predators with their sharpness, but many have stinging ants living inside them.

Acacia trees can grow from 4 – 6 m (13 – 20 ft), with a gracefully arching canopy that is wider than their height. They have clusters of yellow or cream flowers, depending on the species.

Because they are well-adapted to arid conditions, Acacia trees can be grown in areas with low rainfall. 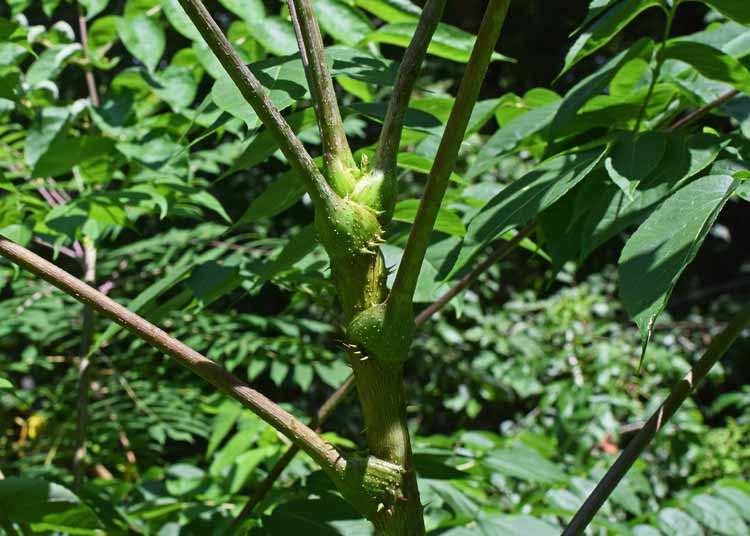 The Devil’s Walking Stick is native to eastern North America, growing in Zones 4 to 9. It is found along the margins of woods and in open pastures.

When the tree is young, its trunk is covered in sharp prickles, which tend to disappear as it matures, reaching a full height of 10 m (30 ft). 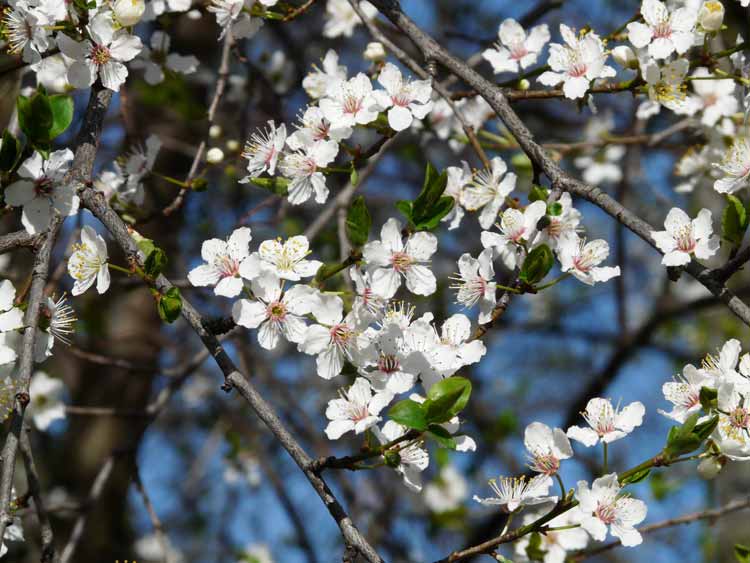 The American Plum is a native tree that will thrive in Zones 3 to 8. It will naturally grow into dense thickets, reaching a height of 4 metres (14 ft). It suckers easily, so you will want to plant it where you can control its spread by mowing.

The short spurs on the older twigs will sometimes turn into thorns, although this is not always the case. It can take several years for thorns to develop on an American Plum.

American Plums have an abundant show of white blossoms in spring, which are followed with clusters of purple fruits in late summer. 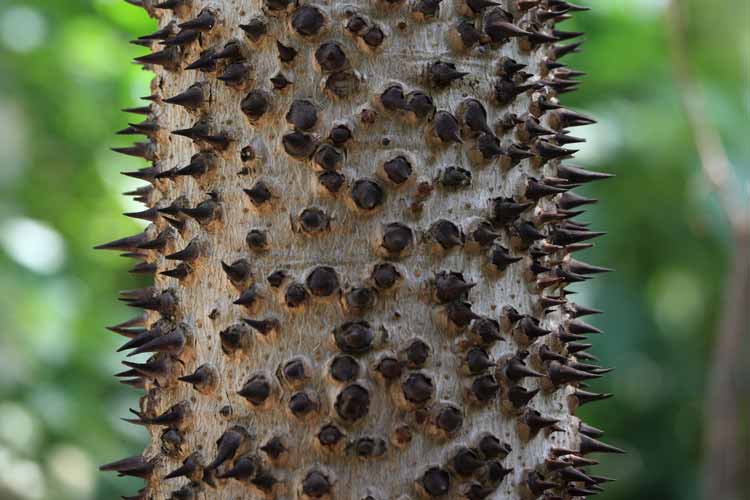 While the Sandbox tree is fascinating, it’s not suitable for inclusion in a residential landscape.

Its trunk is covered with incredibly sharp, cone-shaped prickles, and the sap is poisonous, but those are not the most dangerous part of this tree.

When the pumpkin-shaped fruits explode, they can send their shrapnel at speeds of 150 miles per hour, injuring anyone who is in its path. This has led to its other common name, the Dynamite Tree.

On top of everything else, it’s also invasive, which is hardly a surprise when you consider how its seeds are spread.

So, while this prickly tree is fascinating, it’s best admired from afar.

Trees with thorns, spines, or prickles should not automatically be discounted as landscape trees. While you may choose to plant them where they will not put people at risk of injury, they have many good qualities. They often have attractive flowers and fall colour, and can provide valuable habitat and food for wild birds.