It’s almost springtime and you want to get your lawn off to its best start. But what are dethatching and aeration? Are they the same thing? Are they even necessary? While thatch and soil compaction both stunt grass growth and cause bare patches, they need different fixes.

The difference is dethatching removes the too-thick layer of dead grass, stems, and roots that prevent water from reaching the soil and sun from reaching the grass blades. Aeration reduces soil compaction by adding holes in the soil for oxygen and moisture to reach roots and lower layers of soil.

Dethatching vs. Aerating Your Lawn

Before we get to dethatching, we need to know what thatch is. Thatch is the layer of living and dead grass shoots, stems, and roots that build up between the soil and the grass blades. (Thatch is NOT dead leaves or debris.)

Some thatch is beneficial to your lawn, as it shades the soil so your lawn needs less water and the thatch breaks down into nutrients to feed your grass.

However, when thatch becomes too thick (more than ½”), it can suffocate your grass, creating an anaerobic layer that prevents water, oxygen and amendments from reaching the soil and creates the ideal habitat for fungal diseases insect pests like sod webworms and billbugs.

Excessive thatch is generally caused by too much synthetic nitrogen or feeding lawns synthetic fertilisers when grass is heat-stressed or dormant. The excess nitrogen causes the grass to grow too quickly, which accelerates thatch buildup. 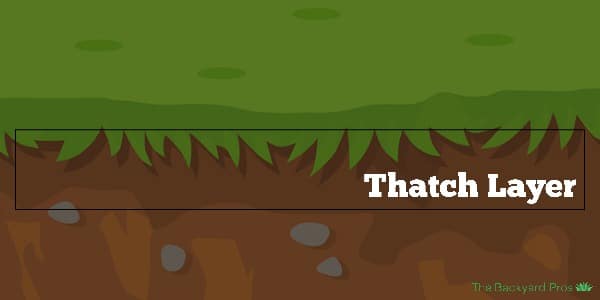 Synthetic nitrogen also has a nasty habit of killing off the beneficial microbes and worms found in your soil that would have otherwise broken the thatch down into nutrients that benefit your lawn. Switching to compost for a fertilizer will help reduce thatch problems over the long-term.

Another cause of excessive thatch is growing aggressive grass species like Kentucky bluegrass, creeping red fescue, and creeping bentgrass, or stoloniferous grass that spreads through above ground stems. Seeding with perennial grasses like perennial ryegrass and tall fescue will reduce thatch problems overall. These species also are hardier and lower maintenance.

Leaving grass cuttings on the lawn DOES NOT create thatch. Fresh grass clippings break down too fast. So unless your lawn has a thick thatch layer (thus preventing the grass clippings from reaching the soil), leave your grass clippings on your lawn to recycle those nutrients back into the soil.

Dethatching is the process of removing excess thatch and to prepare for fertilizing, overseeding, and restarting a lawn. Dethatching is done once or twice a year when your lawn is growing most vigorously. You can use a bamboo rake (which grips thatch better than plastic) or rent a power rake/dethatcher, a machine that’s kind of like a mower but removes thatch.

Aeration is the process of adding small holes to your lawn to allow more oxygen and water to get to the roots. Aeration is used when the soil is compacted, which means that roots have less room to grow, water can’t easily soak in, and the roots don’t get any oxygen.

Your soil is compacted if: 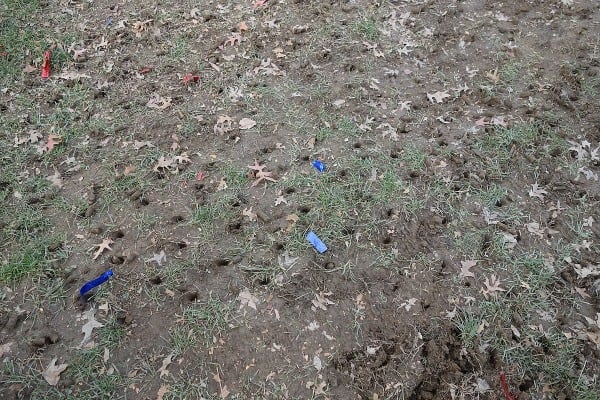 This file is licensed under the Creative Commons Attribution-Share Alike 4.0 International license and attribution is given to the author Tdorante10.

Soil compaction is caused by heavy clay soil, heavy foot traffic, driving heavy mowers or vehicles over the lawn while wet, or from a lack of organic matter in the soil. Compost will help aerate your lawn over a few years.

There are 2 types of aerators:

Is your lawn in need of aeration? Check out our easy 5 step guide to aerate your lawn.

Is Dethatching or Aeration Better for Overseeding?

Both dethatching and aeration have a part to play in overseeding, and which you use depends on your lawn’s condition.

If you have too much thatch, then the seeds won’t reach the soil where they germinate. For this reason, you may want to dethatch even a shorter layer of thatch.

Should I Dethatch or Aerate First?

Dethatch first, aerate second. Dethatching will remove all the excess buildup before you run a core aerator over an area.

Can You Dethatch and Aerate at the Same Time?

How Much Does It Cost to Dethatch a Lawn?

How Much Does It Cost to Aerate a Lawn?

While dethatching is something you can do yourself, a core aerator is a much more unwieldy beast. Unless you’re in terrific shape and really want to DIY it, your best option is to hire a contractor. They may give you a package deal with dethatching and overseeding too.

Hiring a contractor: $75 – $200 (depends on how big your yard is and additional services)

In lawn care, sometimes less is more. You don’t always need to aerate or dethatch. Knowing when and when not to dethatch or aerate will help you avoid making costly mistakes.