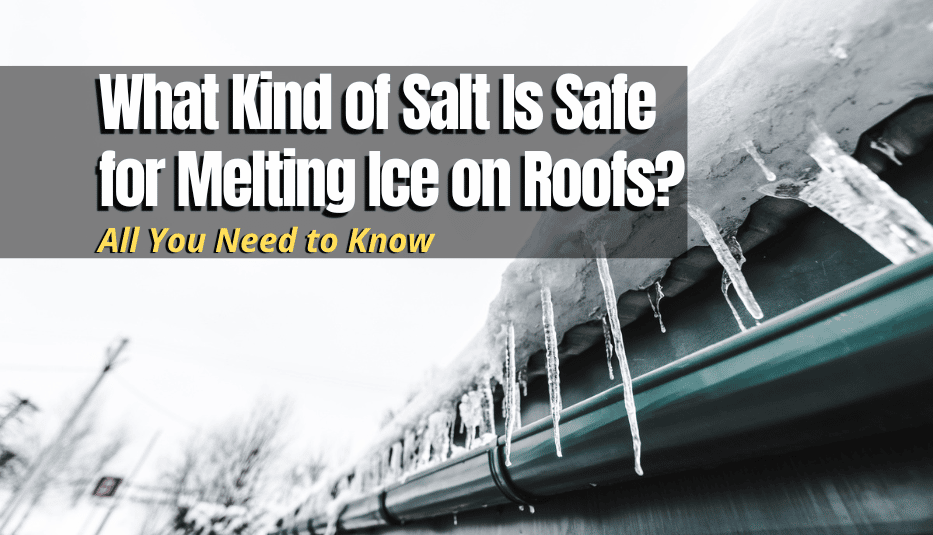 Leaving ice on the roof for too long can damage its structure, so knowing how to deal with it is imperative to know how to deal with it. For a long time, salt has been the number one help when it comes to melting ice, so you might be wondering if it works on roofs. What kind of salt is safe for roofs, and how do you use it? Read o to find out!

Can You Use Ice Melt and Rock Salt on Roofs?

When applying methods to melt roof ice, you need to exercise extreme caution. If the ice melt is not applied correctly, there is a significant risk that the shingles may become corroded. Rock salt, for instance, might not do as much damage to asphalt shingles as other agents, but it will rust the nails that are used to hold them in place.

Does the Roof Type Matter?

Ice can cover a variety of surfaces, including metal, wood, or asphalt. Read your roof-type instructions on the packaging first, then apply the ice melt solution as directed. It is important to ensure that you do not accidentally cause damage to the surface by ensuring that you are using a safe product.

Is Rock Salt Safe for Roofs? 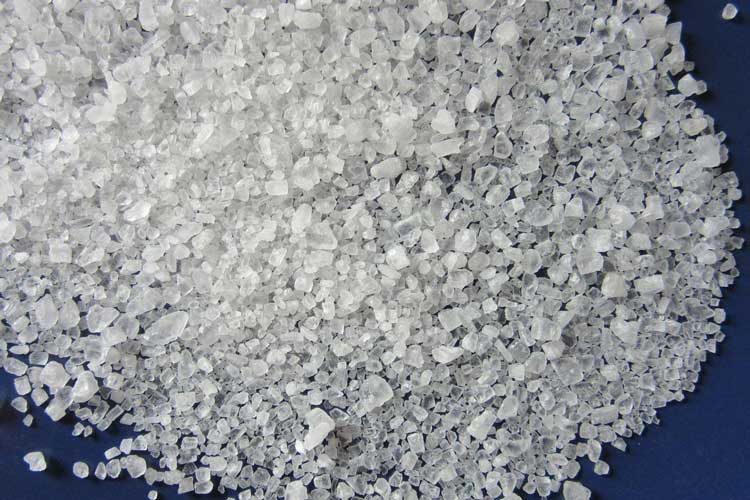 As a result of the oxidizing and corrosive elements that it contains, rock salt is most effective when used to remove ice off tougher surfaces such as concrete. You should only apply it on roofs in specific situations, such as when it is really cold outside. It can cause damage to shingles and other fittings if it is applied repeatedly.

Calcium chloride, which is also widely utilized as a de-icing agent, is available in the forms of liquid, pellets, and flake. The usage of pellets is common in residential and household settings, although liquid salt and flakes are more commonly found in commercial and industrial settings as well as during overhauls.

It can withstand temperatures as low as -30 degrees Fahrenheit, but it must be handled with extreme caution when being utilized. This is because it contains a higher concentration of chloride, which, if it comes into contact with the skin of a human or any other animal, can cause irritation.

They swiftly melt the ice, but there is some concern that they may be harmful to the surrounding environment. In addition to this, they are exothermic, which means that if there is a temperature difference, they might cause fractures on the roof or surrounding the chimney. 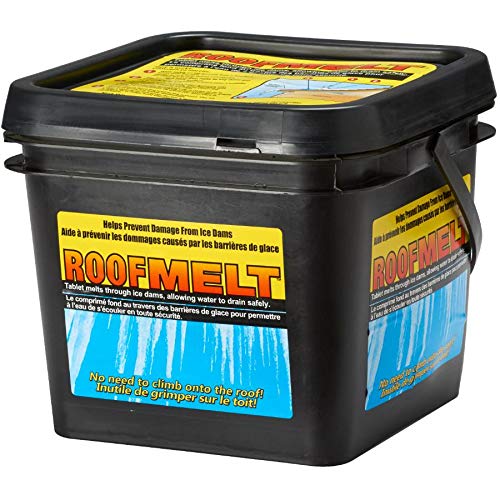 Roof Melt is a great product to try. It contains 95 percent calcium chloride and works at temperatures that go way down to -20 degrees Fahrenheit.

The most prevalent form of de-icing salt is sodium chloride (also known as halite or rock salt), widespread across the country. Crystals of varying sizes and shapes make up this substance. The fact that they can be reasonably priced makes them the sort of de-icing salts that are most commonly used.

However, they are only effective up to temperatures of 20 degrees Fahrenheit, and they cause damage to the tiles and roof shingles that are caused by freeze-induced expansion and contraction. In addition to this, they are moderately poisonous to the local flora and fauna, and as they dry out, they leave a yellowish residue on the roadways and the surrounding vegetation.

Potassium chloride and urea are other examples of one of the most prevalent types of ice melts employed in the United States today around colder climates. However, even though they are thought to be risk-free, they may not fulfill your objective of finding a solution that is 100 percent natural and kind to the environment.

Even though they might not immediately harm the concrete or the vegetation, the substance leaves a pale residue when it has dried. The repeated thawing and freezing of concrete may cause harm to the substance, much as it does with other chlorides.

Magnesium chloride is yet another ice melt that is commonly utilized for roofing. It is comparable to none of its chemical-based analogs in terms of its corrosiveness and toxicity levels. However, this does not imply that it is completely risk-free in any way.

It causes less irritation to the skin, as well as to plants, animals the environment, metal, concrete, and other surfaces. On the other hand, it only functions down to 5 degrees Fahrenheit.

Are Blends Safe for Roofs?

Rock salt is typically included in blends. However, any one of the compounds above can also be used. Because each de-icer has a distinct point at which it melts, using them in conjunction with rock salt causes them to emit more heat and speeds up the process of melting ice.

The difficult part is coming up next. Because of the freezing and thawing process, the metal or concrete will inevitably expand and contract, which will eventually cause it to get damaged. In addition, every one of the compounds is highly corrosive and may also affect the surrounding environment.

For instance, sodium chloride and magnesium can be mixed together to imitate a temperature of -12 degrees Fahrenheit, which lowers the melting point. On the other hand, it could melt the snow more quickly and, in the long run, do harm to the surrounding environment. Because of the quickness with which they melt in the mouth, blends are likewise a favorite among consumers.

What are Some Alternative Ways to Melt Ice on Your Roof? 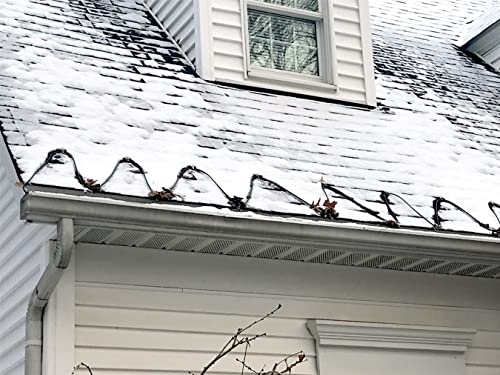 Roof heating cables are electric heating wires that are insulated and are developed specifically for use in roof and gutter applications. These kinds of solutions offer consistent and lasting protection against the formation of ice dams since they are designed to withstand the damaging effects of sunshine, moisture, and impact.

Consider the de-icing equipment to be permanently installed after it is placed in its new location. In theory, homeowners might dismantle the installation each spring, but in practice, there is no requirement for you to do so. The cables continue to function normally even after countless years since they are held in place by sturdy clamps.

The ice dam can be melted by slowly pouring hot water over it from a garden hose. This will let water to flow through the gutters. Be careful if you have current damages the water can quickly cause damage, be on alert for any ice dam damages.

Snow accumulation and temperature changes are likely to cause snow to melt and ice to form. Staying on top of things and having snow removed regularly is a good way to prevent ice buildup.

It may be in your best interest to get the snow on your roof removed weekly or bi-weekly. You can hire a professional to do the job or you can follow safety precautions and tackle snow removal yourself.

Snow can be removed in numerous ways including rope, snow roof rakes, and so on. These do require proper skills and preparation, it may be in your best interest to contact a snow removal expert first.

Note, to protect the shingles from becoming damaged, the National Roofing Contractors Association suggests that a small amount of snow be allowed to remain on the roof.

Can You Make a DIY Ice Melt for Your Roof at Home?

To make your own DIY ice melt, grab half a gallon of warm water, a few drops of dish soap, and two ounces of rubbing alcohol. You only need to combine these two things, either by shaking them together or by stirring them together. Take an empty spray bottle, put the solution inside, and spray it on the roof.

This solution will remain effective for a much longer period and do a much more effective job of melting the ice than hot water. It will also avoid the chemicals and poisons that are typically found in de-icers purchased from stores.

The usage of salts is by far the most popular approach taken by most people. These can take any shape or form. However, you must be aware of the different kinds of salt that may be purchased at the store. On the other hand, not everyone is interested in salts derived from chemicals.

As an Amazon Associate I earn from qualifying purchases.