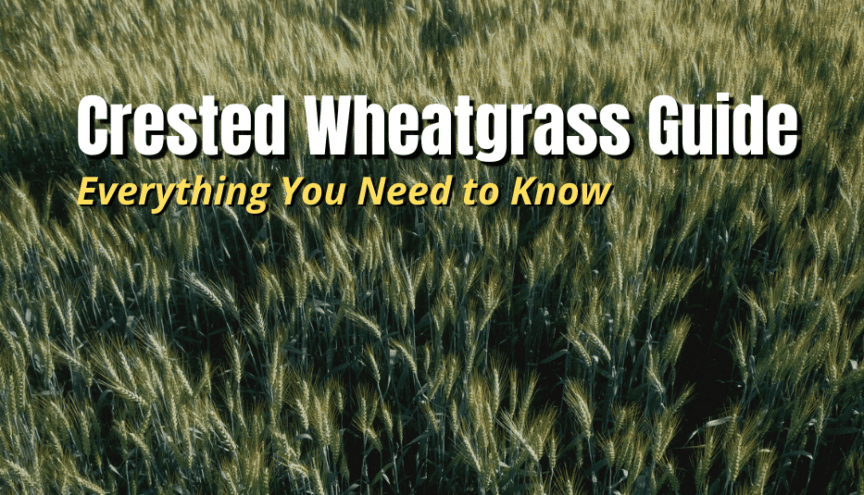 While crested wheatgrass is most often used for pastures and roadside erosion control, it can also make a low maintenance lawn in places with freezing winters and low rainfall. Is crested wheatgrass the right grass for your lawn? Read on to find out.

Brought from Russia to the US and Canada, crested wheatgrass was originally used in the Midwest for foraging because it can handle extreme cold winters and droughts, and even short periods of extreme heats. It didn’t take long for horticulturalists to recognise its benefits for lawns, and in 1932, Fairway became the first turfgrass cultivar. These days, you can find this grass on roadsides, lawns, parks, and even a few golf courses.

If you want a really low-maintenance grass, crested wheatgrass may be for you. In fact, you may not have to fertilize or water this grass at all, as it only requires 1 – 2 lbs of nitrogen per 1,000 sq ft, half as much as perennial ryegrass and fescues, and a quarter of the amount that Kentucky bluegrass needs.

Some fairway wheatgrass cultivars like Ephraim have a rhizomatic growth habit when it gets enough water (14 inches per annum), allowing it to spread by itself and fix some damage by itself, although not to the extent of bluegrasses. But unlike bluegrass, you may only need to mow this lawn 4 or 5 times a year.

Crested wheatgrass is most often used for pasture and for low-maintenance roadside turf, and because of its deep roots, is great at controlling soil erosion in places with very low rainfall.

However, once established, it’s very difficult to get rid of, as some ranchers have discovered. It grows thick enough to keep weeds down, but also prevents other grasses and herbaceous plants from growing, which means places seeded with crested wheatgrass won’t provide food for pollinators and beneficial insects. If you’re looking for low-maintenance grass to cover out-of-the-way spaces on your acreage, then look at native prairie grasses to support pollinators.

While finer-textured than other wheatgrass varieties, Fairway wheatgrass is rougher textured and tolerates less foot traffic than Kentucky bluegrass or perennial ryegrass. But this isn’t necessarily a deal breaker if the lawn won’t see much use.

It also has poor shade tolerance, so it’s better to go with chewing fescue or a fescue mix for shaded areas.

Pros and Cons of Crested Wheatgrass

How To Grow Fairway Crested Wheatgrass

The best time to seed fairway wheatgrass is in the fall, when temperatures are stable, but with enough time to establish before winter arrives. Seed less densely and water less than you would other cool-season grasses to increase germination rates and reduce damping off. You could even try dormant seeding.

Allow fairway wheatgrass to grow longer in the summer (4 inches) and cut it back during the winter (2.5 inches). Depending on the cultivar, you may only need to mow 4 or 5 times a year.

Fairway wheatgrass will out-compete weeds, so long as you let it grow longer (a standard weed-control practice) and only irrigate when necessary. Wheatgrass’ chief advantage against weeds is that it needs less water than they do, but if irrigated, that advantage disappears.

Crested wheatgrass does not need much nutrients at all, and requires the least nitrogen out of the main cool-season grasses. Avoid fertilizing unless strictly necessary, otherwise you’ll just be feeding the weeds.

Wheatgrass requires very little water to thrive and is one of the best choices for a non-irrigated lawn. In fact, watering too much will just encourage weeds. It only needs 10 inches of annual precipitation, which many dry places get. If you receive less than that, try Siberian wheatgrass, which can survive with as little as 5 inches annually.

Crested wheatgrass prefers well-drained soils, and doesn’t do well with heavy or clay soils, so depending on your soil, you may need to core aerate the soil if it’s heavily compacted. If your soil requires frequent aerating, then you may wish to go with another grass that can handle denser soils or you’ll end up spending more time on maintenance.

Some wheatgrass varieties have rhizomatous growth, which will increase thatch, but not to the level of other rhizomatous grasses like Kentucky bluegrass. Monitor thatch levels and only dethatch if the thatch becomes matted or over one inch thick.

Does wheatgrass make a good lawn?

While most wheatgrass varieties do not make good turf grass, crested wheatgrass is an excellent low-maintenance lawn option, as it can survive with as little as 10 inches of rain per year, requires little fertilizer, and depending on the cultivar, may only need to be mowed a few times a year. But if your lawn sees heavy foot traffic or has a lot of shade, look for another grass.

Is crested wheatgrass an annual or perennial?

Crested wheatgrass is a cool-season perennial that can survive frigid winters, making it perfect for northern regions with brief summers and long winters.

Crested wheatgrass is non-native, but isn’t currently considered invasive as a lawn option as it doesn’t spread quickly. However, it outcompetes native grasses, turning fields into monocultures that don’t support other animals, and is difficult to get rid of once established. If that’s a concern, then take a look at native prairie grasses.