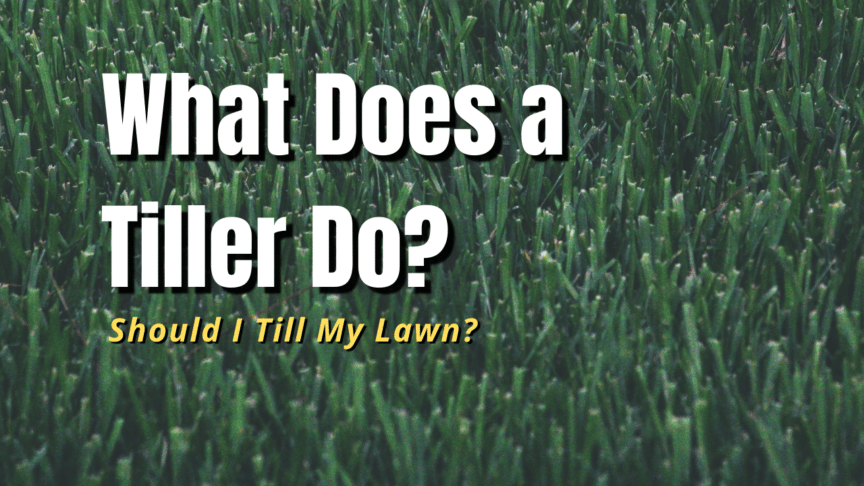 You’re planning a major DIY lawn renovation (all grass must go!), but researching on the internet, you keep seeing people telling you that you must till the soil before seeding. What exactly is tilling? And should you till your lawn before seeding or is this just another internet myth?

A rototiller (or tiller) uses metal blades called tines to break up and loosen soil. It’s most often used in farming or gardening but is sometimes used in lawn renovations to break up heavy clay or rocky soil for replacement.

Why Would I Need to Till my Lawn?

Tilling is often touted as the first step to lawn renovations, so obvious that it doesn’t need second thinking. But tilling your lawn can often cause more problems than it solves. The only time you should till your lawn is if you need to dig through hard soil to either build beneath the lawn (like automatic irrigation, a soakaway, or French drain), remove rocks from the soil, or replace it with a more fertile topsoil and compost combination.

Tilling can break up clay soil from major projects.

Tilling makes it easier to dig up hard, compacted soil (especially heavy clay soil) as it’ll break up and loosen the soil with less effort for you. This is especially handy when you’ve decided to replace your heavy clay soil with a much lighter topsoil and compost combination, or when you’re building beneath the soil.

However, if you’re just trying to relieve compaction, then use a core aerator. That way you can keep your existing lawn and not have to start from scratch.

Tilling will bring up weed seeds.

Fun fact: dormant weed seeds can survive for decades under the soil and still be able to germinate as soon as they reach the surface. And what does tilling do? It breaks up the soil and turns it over, exposing all of those dormant seeds. If compaction isn’t a problem, try topdressing with compost or topsoil to start fresh without all the new weed pressure.

If weeds ARE the problem, soil solarisation will bake to death all the weeds and turn them into compost. If you have to till for other reasons, then water the newly tilled ground, allow the weed seeds to germinate, then use soil solarisation.

Sure, a tiller does a lot of the work of breaking up the soil, but you still need to shove it around your lawn — and it’s even harder in heavy soil or if the tiller meets a rock or buried tree roots. Then you need to smooth the soil completely level or you’ll suffer the bumps every time you mow.

It’s still hard to level out the lawn after tilling.

Homeowners may turn to tilling to level out their lawns, but it’s actually really hard to level out a lawn after tilling. The tilling process itself will leave uneven mounds of soil and since there’s been so much air added to the soil, your footprints sink into the soil as you walk across it. Adding topsoil is a much easier and more effective way to do this, and if your lawn is really bumpy, save yourself the grief and hire a professional instead.

Working soil amendments and compost into the soil will put nutrients out of reach.

Turns out, you don’t actually need to work soil amendments into the soil, and doing so can in fact waste all of those nutrients. Water will carry the nutrients deeper into the soil. If they’re already six inches below, where new grass roots can’t reach, the nutrients will drain even further down. In nature, dead grass blades and other herbaceous perennials will sit on a layer on top of the soil while its being broken down into nutrients. The nutrients on the surface will be brought down to the roots. Imitate nature by topdressing instead.

Tilling is really hard on the soil, and the more often you do it, the more the negative effects build up. Tilling breaks up soil structure and reduces crop residue — the plant matter that cushions the force of pounding raindrops. Without that cushion, soil splatters and clogs the pores where water would otherwise enter the soil.

Tillage also depletes the existing organic matter in the soil, so soil compacts more easily, doesn’t hold on to water as well, and you need more and more fertilizer to compensate. And it’s devastating more the millions of beneficial microbes that live in your soil that make your lawn healthier and reduces disease and fungi. Every shovel is like an earthquake. These beneficial microbes break down organic matter into nutrients that plants, like your grass, can absorb.

Avoid tilling when possible. Your lawn will be healthier for it.

Tilling by Hand VS Tilling Machines

You don’t need to rent a tilling machine in order to till your garden. If you’re only tilling a small spot, then you can use the double digging technique instead.

Benefits to double digging include:

The downside is that this is back-breaking work! Tilling by machine shares this downside, as they’re hard to push even for someone who’s very fit, although it’ll be easier over a greater square footage.

What’s the Difference Between A Tiller and a Cultivator?

A tiller is used to break up hard soil while a cultivator is used to mix loose soil (like mixing in amendments) or break up small weeds before they get established. Both are used more extensively in gardening, and both aren’t really necessary except for very specific jobs.

Does Tilling Cause Erosion?

Yes, tilling can cause erosion. Because tilling breaks up hard soil and adds air pockets, the soil is lighter than before. Until new plants become established and hold down the soil with their roots, the soil is prone to blowing or washing away.

Tilling can kill existing weeds as it breaks up and turns over the soil so that the weeds become buried. But turning the soil also brings up dormant weed seeds that can then take over your lawn. If you’re going to till, take 4 to 6 weeks to solarize the soil to kill the emerging weeds before seeding your lawn. This will reduce your weed pressure overall. And if you’re only tilling to kill the weeds, then try soil solarization instead.