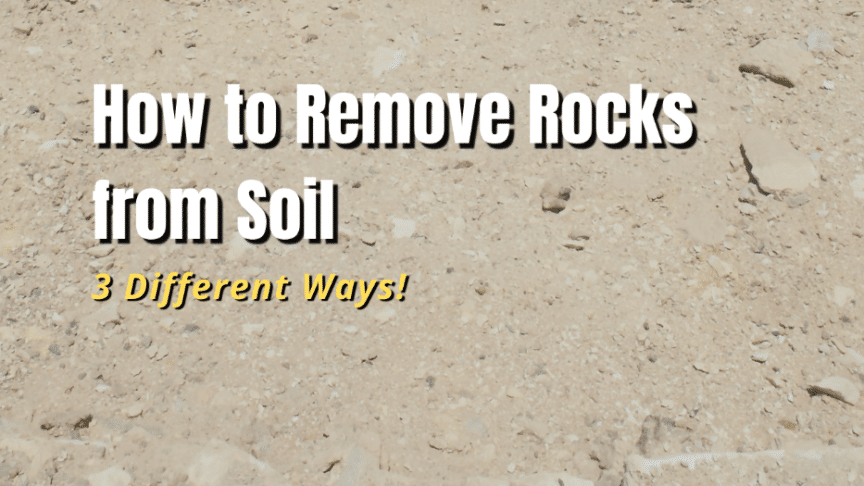 While a few rocks in your garden soil is not a concern, if your trowel hits a stone every time you dig, you’re going to have to do something about it. Removing rocks is a big job, but there are several ways that you can make this easier.

To remove rocks from the soil, loosen up the soil (either with a pitchfork or rototiller) and shovel the soil onto a screen over a wheelbarrow. Remove the rocks from the screen and replace the soil. If you mark sections ahead of time, you can easily see which soil has been sifted and which hasn’t.

Are rocks good for my garden?

Some rocks in your garden can actually be beneficial as they provide:

When should I remove the rocks in my soil?

You should remove rocks from your garden beds if you’re going to use a rototiller or cultivator, to prepare fine seed beds for plants that need it (like carrots), or to prevent rock overcrowding the soil and pushing plants out.

If you have a few stones on top of your garden soil, you don’t need to worry about removing them — although it is easy enough to pick them up and put them out of the way. You might even find a really cool rock that are perfect for DIY crafts. And if you use no-till methods, you can get away with more rocks in the soil than if you till.

But if you have a lot of rocks emerging from the soil, then you may have to take more drastic action. Rocks can block plant roots from spreading out through the soil to access all the nutrients they need, which will stunt their growth or even kill them.

Too many rocks will also mean that water will flow through the soil more quickly, rather than absorbing into the soil to maintain moisture. If you’re growing desert plants and succulents, this is a plus. If you’re growing anything that needs more moisture than that (like most other vegetables and flowers), you’re going to have problems.

3 Ways To Remove Rocks From The Soil

The manual sifting option is your best option if you’re not interested in or able to rent or buy equipment, or if you need to pick it back up whenever you have time. Best used on loose soil that’s easy to dig through.

If your soil is hard and difficult to shovel, and you either own a tiller or can rent one, then use the rototiller method.

If you have a large area to sift through, you may want to graduate to the next step up: a tractor, plow, and screen.

How to remove rocks:

Option #4: How To Remove Large Rocks With a Crowbar

The above two methods work for small to medium rocks that you can pick up by hand or by shovel, but what if you have a boulder wedged into the soil?

How to remove large rocks:

If the rock is too big to roll, then you will need to split the rock into smaller pieces or hire a rock hauling company.

How to Dispose of Rocks from My Yard?

You’ve sifted through the soil and now have a gigantic pile of muddy rocks. What do you do now? You could always take the rocks to a landfill or rent a dumpster (if you’re removing a ton of rocks), but that’s a waste when people pay good money for gravel. Instead, you can repurpose them.

Can I Use Hand Tools to Remove Rocks In The Soil?

Yes, you don’t need to buy or rent expensive machines to remove the rocks from your soil. If rocks keep popping up each spring, invest in a:

What Can I Plant In Rocky Soil?

Removing rocks from garden soil can be pretty backbreaking, and if it’s going to be an annual occurrence, you can save yourself the labour by growing plants that love that rocky soil.

Plants that love rocky soil include:

If you still want to grow vegetables and flowers that need wetter feet but don’t want to battle rocks, consider raised gardens. You can easily build your own garden beds and even separate it completely from the soil.