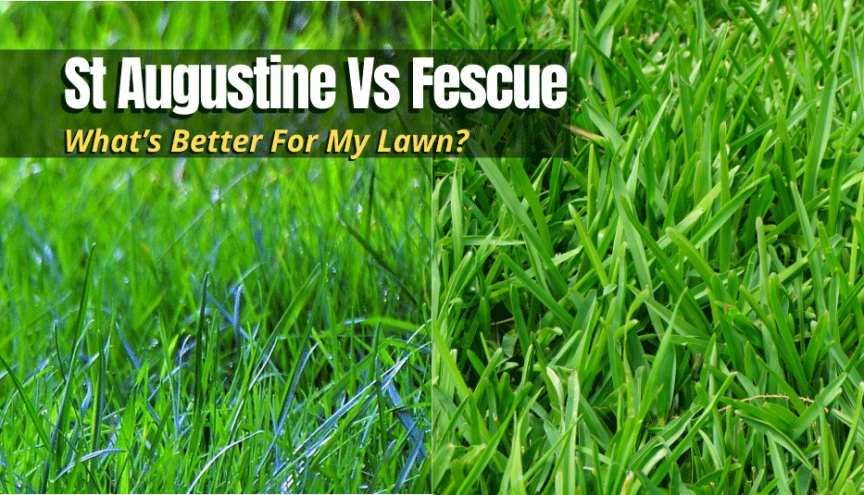 If you’re looking for a grass that will do well on that shady side of your Zone 9 yard, you may be considering St Augustine or Fescue for the job. While St Augustine has been the go-to answer, Fescues can handle many of the same conditions with less ongoing maintenance. Which is best for your lawn? Read on to find out.

What Are St Augustine And Fescue? 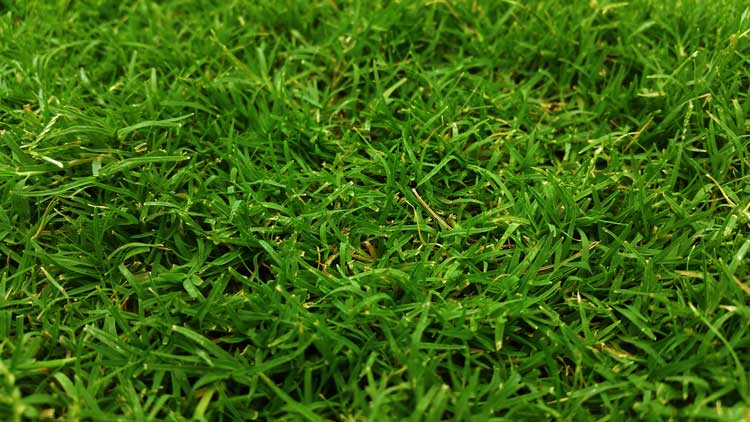 Even if you don’t know much about grass species, if you live in Florida, then you know about St Augustine. It’s widely used because it can handle the extreme heat, humidity and salt of the coastal subtropical region, and unlike the other most popular competitor Bermuda, it can even handle part shade.

But those advantages come with lengthy drawbacks. You won’t want to walk barefoot on its rough texture. It is extremely vulnerable to cold, insects, and disease. In fact, it has its own disease named after it – St Augustine Decline (SAD). It is not drought tolerant at all and needs twice as much water as Bermuda. Outside of very specific conditions, St Augustine is a very demanding grass that doesn’t give much back.

If you live in South Africa and Australia, you will know this grass as Buffalo Grass or Buffalo Turf (not to be confused with the native North American Buffalo Grass Buchloe dactyloides).

To learn more, check out our complete guide to St Augustine. You can also read our St. Augustine vs Buffalo grass article here. 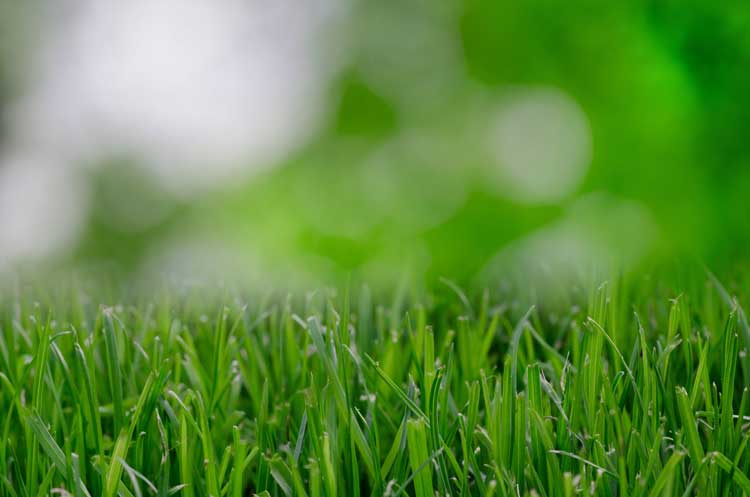 Like many other hardy grass varieties, Fescue was originally seen as only a pasture grass. It wasn’t until the mid-20th century and the cultivar Kentucky 31 that horticulturists and landscapers began to recognise its inherent advantages as a lawn grass. It’s able to withstand heat, cold, part shade, and drought, while still being fairly low maintenance.

But while Fescue can handle the heat in northern and transition zones, it can suffer in the continual heat waves of Zone 9 unless planted in part shade and watered more heavily. If you’re in Zone 10, look elsewhere.

To learn more, check out our complete guide to Fescues.

Which Is Better: St Augustine Or Fescue?

St Augustine comes with a green color and a very coarse texture. If the grass is thin, the stolons stick out unattractively. You can mow St Augustine pretty low at 2 to 3 inches for a more manicured look. Mowing will also encourage it to spread. Because it spreads by stolons and grows pretty quickly, it’ll fill in gaps by itself. But it doesn’t grow so quickly that it becomes a virulent weed.

Fescue grasses come in a blue-green, green or dark green, and have a medium texture that’s not too unpleasant to walk upon. If texture is a priority, take a look at the aptly named Fine Fescue. Clump-growing varieties may look uneven and are not great for a soccer field, but overseeding and adding rhizomatous varieties will help. Fescue grasses do better when left long at 3 to 4 inches, especially when they have to deal with the heat. Allowing the grass to grow longer encourages deeper roots so it can survive the heat and drought better.

If you’re looking for a ground cover more than a lawn for activities, then take a look at Creeping Red Fescue. When left long, it creates soft cascading waves that will remind you of a dream. Tall Fescue also makes a superb addition to garden beds as an ornamental grass.

If you want a St Augustine lawn, your choices are plugs or sod. Seed germinates so poorly that it’s not offered commercially. This makes starting a St Augustine lawn more expensive. Once in place, it’ll take some time to establish itself fully. The best time to start St Augustine is in the late spring and summer when temperatures are above 80F.

Fescue grass comes in seed mixes that germinate reliably within 2 weeks, meaning you can save money and labor. Once germinated, it establishes itself quickly. You may need to overseed your lawn annually to cover gaps and grow a thicker lawn.

St Augustine does best in sandy-silt soils that are on the acidic side, although it can tolerate some alkaline. It doesn’t do well in heavier, clay-based soils or soils that are prone to compaction. When growing outside of sand mixtures, you may need to core aerate regularly.

Tall Fescue does well in all soil types and can handle some compaction, but other varieties do best in lighter sandy or silt-based soils.Like St Augustine, they may need to be core aerated to relieve compaction.

St Augustine is a warm-season grass (turning green during the heat and going dormant in cooler temperatures) that grows best in subtropical regions like Zone 9 and 10. While it does well in sweltering summers, it cannot handle cold at all. As it can handle part-shade, it’s a popular choice in these zones for that reason.

Fescues are cool-season grasses (turning green when it’s cooler and going dormant in high temperatures) that can be grown throughout most regions. They do better in hotter zones when planted in part shade, as the shade will protect them from the heat. Avoid planting in Zone 10. If you need a grass that can survive in shade, go with Chewings Fescue.

Both will need more care under shade than under full sun.

Pests and disease plague St Augustine as it has little tolerance to either. Many of these don’t have effective controls – meaning you could spend a lot of time and money doctoring your lawn and still lose it. These problems include: St Augustine Decline (SAD), Take-All Root Rot, Brown Patch, Gray Leaf Spot, chinch bugs, and Lethal Viral Necrosis.

Fescues have high resistance to insects and good resistance to disease, so as long as you keep your lawn healthy, you likely won’t have to deal with either of these problems. Pests and disease take advantage of ailing and dying plants, after all.

Organic practices like using compost instead of synthetic fertilizers will aid the beneficial microbes in your soil which in turn support your grasses’ health. 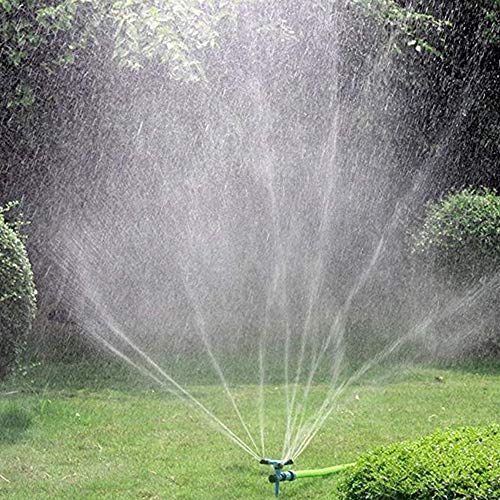 St Augustine is highly water dependent and must either have a lot of regular rainfall or have irrigation to survive. With its shallow roots, it has little drought tolerance and will die without water. It needs more water than its warm-season competitor Bermuda.

Fescues need only low amounts of water, making it a great choice for regions with low rainfall or non-irrigated lawns. Your water bill will certainly be a lot better. With its deep roots, Fescues are drought tolerant. They will go brown (dormant) under excessive heat and lack of water, and will need at least 1 inch per month while dormant. If you can irrigate through the summer (or have plenty of rainfall), then Fescues will stay green longer.

Both grasses benefit from being kept longer in the summer’s heat, as their longer blades will shade the soil to keep water from evaporating longer and give both plenty of resources to survive stresses.

During the establishment phase, both grasses will be more prone to weeds.

St Augustine is sensitive to 2,4-D herbicides, so avoid using them as you may end up killing your grass along with the weed. Whichever grass you have, always hand pull when possible. If you must use herbicides, only use spot treatments. Even herbicides deemed safe for your grass species will hurt your grass a little.

St Augustine needs a lot of fertilizer – 4 to 5 lbs of nitrogen per 1,000 sq ft per year, which is on the high end for grasses. This means you’ll spend a lot more money on fertilizer (either synthetic or compost) and a lot of time applying it.

It’ll need synthetic applications every 8 to 10 weeks during the growing season. Spikes in synthetic nitrogen will exacerbate thatch problems and make your grass more vulnerable to pests and disease as it destroys soil health. If you’re going the organic route, you’ll need to topdress with compost twice a year with monthly compost tea boosts.

Fescues need a low-to-moderate amount, or 2 to 3 lbs of nitrogen per 1,000 sq ft per year, and is easy enough to do with one or two main applications of compost in the early spring or fall when the grass is growing vigorously. You’ll save time and money when you don’t need to fertilize a lot.

Fast-growing stolons caused by nitrogen spikes are the primary cause of thatch problems, and St Augustine, with its stolon growth habit and high nitrogen needs is prone to them. You may end up having to dethatch every year.

Fescues will rarely have thatch problems because they don’t spread by stolons.

How Can I Tell Whether I Have St Augustine Or Tall Fescue Grass?

Will St Augustine Choke Out Fescue?

St Augustine is more expensive than Tall Fescue because you must start it by plugs or sod, while you can start Tall Fescue by seed. Tall Fescue is also cheaper to maintain in the long run as it needs less fertilizer, water, and pest/disease treatments than St Augustine.