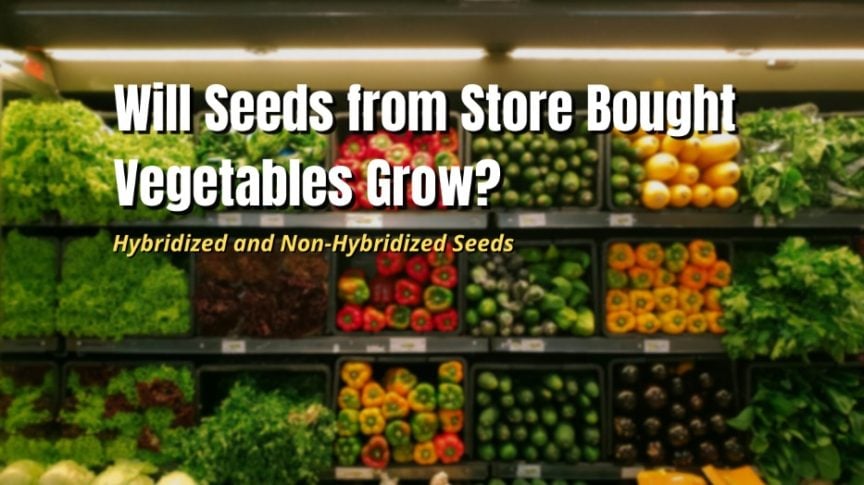 Have you ever tried to grow your favorite vegetables from the grocery store? We’ve used to believe that store-bought fruit and veggies have unviable seeds that we can’t plant in our gardens. Although store-bought fresh produce usually has pesticide residue, wax coating, and other pathogens, non-hybridized varieties do have the seeds that you can plant and grow.

Will the seeds you buy from store-bought vegetables grow?

Yes, seeds from store-bought veggies can grow, but the main issue is the seeds fail to germinate and produce. In order to grow store-bought vegetable seeds, select non-hybridized seed varieties like tomatoes, squash, cucumbers, eggplant, and peppers. You must gather, treat, and save the seeds correctly.

If you’re on the fence about planting the seeds from store-bought vegetables, consider the following tips:

Many grocery store produce is hybridized, which means some seeds don’t bear fruit.  Select non-hybridized seeds for growing vegetables, also known as open-pollinated seeds. Hybridized seeds bear fruit only once so even if you manage to save the seeds from your veggies, they won’t grow. In simple terms, hybridized seeds come from two different varieties of the same plant, these seeds are known as hybrid and cannot be used for reproduction. Tomatoes, for instance, often contain hybridized seeds, which don’t produce in the next generation.

Unfortunately, it’s hard to find non-hybridized seeds that you can save and replant. It’s just a process of trial and error. Plus, there is grocery store produce that has the seeds, which aren’t worth saving at all.

The Seeds That Are Worth Saving

One of the biggest issues about store-bought vegetables is that their seeds aren’t fully mature, and we want mature seeds. In most cases, cucumbers and tomatoes contain immature seeds. If you’re planning to grow tomatoes and cucumbers, it may take a lot of time and money before you find the seeds, which are worth saving and planting.

Purchase a very ripe cucumber or tomato and spoon the seeds in a container. Add cold water to it and place it in a warm place. Each day, stir the seeds and see how they will behave in 2 to 4 days. The immature seeds will float to the surface while the mature ones will sink to the bottom. Rinse away the mature seeds and let them fully dry on a plastic plate.

You can also use this method to determine the viable seeds of bell peppers and cantaloupe. Pumpkin seeds are almost always mature even if you buy that pumpkin in a supermarket. Squash has many varieties, including the seedless one. Look for squash with seeds in case you want to grow it in your own garden.

How to Make the Seeds Work

Depending on when you buy your veggies, grocery store produce tends to be expensive. The last thing you want to do is to waste your money on a particular vegetable in order to get some seeds. However, veggies often go bad and it’s great news for you – as strange as it sounds. Rotten vegetables like tomatoes can have viable seeds.

There’s one trick that you can use to make the seeds from a store-bought rotten tomato work. Fermenting is an excellent way to get viable seeds from grocery store tomatoes. This method might not work for certain types of cucumbers, though.

While you can plant the seeds from a store-bought cucumber, the chance of them ever fruiting is extremely low. Even if you successfully manage to germinate the grocery store cucumber seeds, you might not the same cucumber that you took the seeds from.

What’s the reason? The thing is, store-bought cucumbers are generally F1 hybrids and they’re comprised of 2 or more varieties. It’s absolutely hard to predict whether you’ll grow the same cucumbers or they won’t grow at all.

Check out our seed growing guide and learn more about how many seeds per hole plus what the germination rate is.

Is It Possible to Grow Eggplant from the Grocery Store? 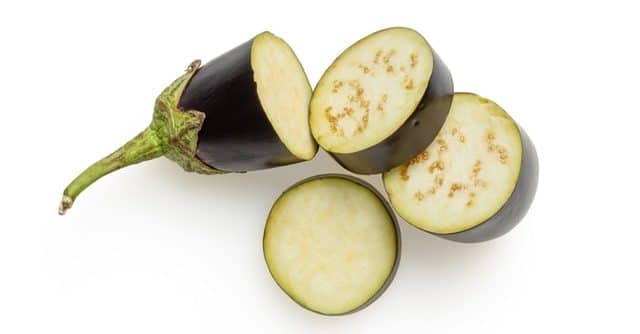 Eggplants are easy to grow, but how about those sold in a supermarket? It depends on the size and variety of eggplant. Choose a big eggplant that has the seeds inside and germinate them by wrapping the seeds in a wet cloth for several days. You can also plant the seeds in damp soil, but the chance they will grow is low. Hybrid eggplants aren’t worth your effort because there’s no chance of re-growing them.

What Are the Easiest Seeds from Grocery Store Vegetables to Grow?

Squash seeds from grocery stores are considered to be the easiest ones to grow at home. They do require plenty of space, well-composted soil, and minimum care. The end result might be squash that doesn’t resemble the original one. However, they’re more likely to grow and bear fruit than tomatoes or cucumbers. Winter squash, like butternuts, tends to grow more trouble-free than gourds and summer squash, yet both can thrive in your home garden.

Which Seeds Will Never Work?

Sprouted seeds are all the rage right now. They’re known for their powerful health benefits and many people strive to grow their own sprouted seeds at home. You can find them in bulk grocery sections or farmer’s markets.

Experimenting with the seeds from store-bought vegetables is fun, but get ready to waste your time, money, and effort. Not to mention that you will need some space for planting those seeds. The risk of potential failure is high and your garden might not bear any fruit. It is all about learning and having fun!

Although the seeds from store-bought vegetables can grow, buying the seeds from an organic seed store is much more effective and time-saving. Or, consider getting your veggies from farmer’s markets. There’s a reduced chance of buying hybrids and the seeds are more viable.

If you still want to experiment with store-bought veggies, let them ripen before planting. Opt for the biggest, most mature seeds to plant and see what will happen next. Avoid setting too high expectations, but hope for the best results.