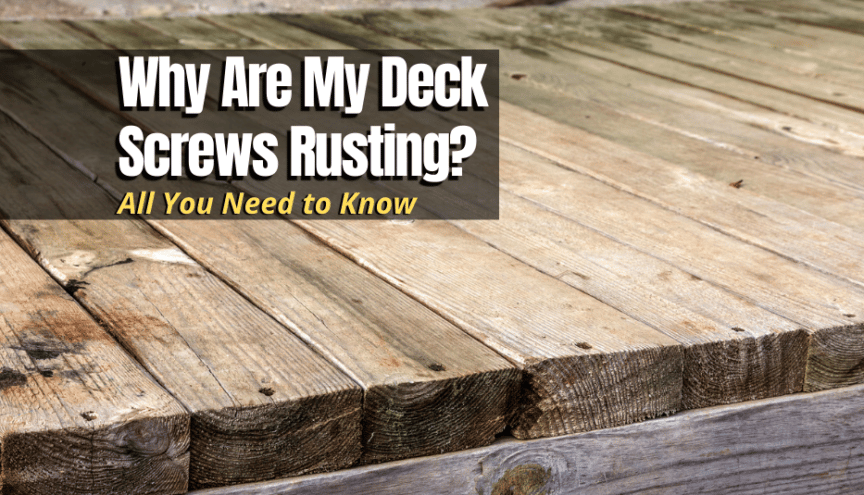 The screws that you use to fasten your deck boards get rained on a lot, which can lead to problems with rust.

Screws rust when iron reacts with oxygen and moisture. Using screws made from rust resistant materials like stainless steel or galvanized steel can prevent this.

If you are installing a deck or you are experiencing rust problems with your current deck, this article will tell you everything you need to know. Read on to learn about why rust happens, how to avoid it, and what types of screws are best for your decking.

What is Causing My Deck Screws to Rust?

Rust, formally known as iron oxide, is created when iron (or an alloy containing iron, like steel) is exposed to moisture and oxygen. A chemical reaction takes place that creates rust. This process is sped up in the process of salt and excess water.

Naturally, this is a common problem outdoors because your screws are exposed to rainwater. If you aren’t careful, the screws can completely disintegrate due to rust. However, using the right type of screws will help you avoid this problem.

What Type of Screws Should I Use When Building a Deck?

Not all types of screws rust and you should pay attention to the type of screws you use, especially if you live in a wet climate. Galvanized screws are a very common option for outdoor applications, including decking. They are coated with a layer of zinc, which stops the air and water from reacting with the iron in the screw, so they don’t rust. Galvanized screws are one of the cheapest types of rust-resistant screws you can get. 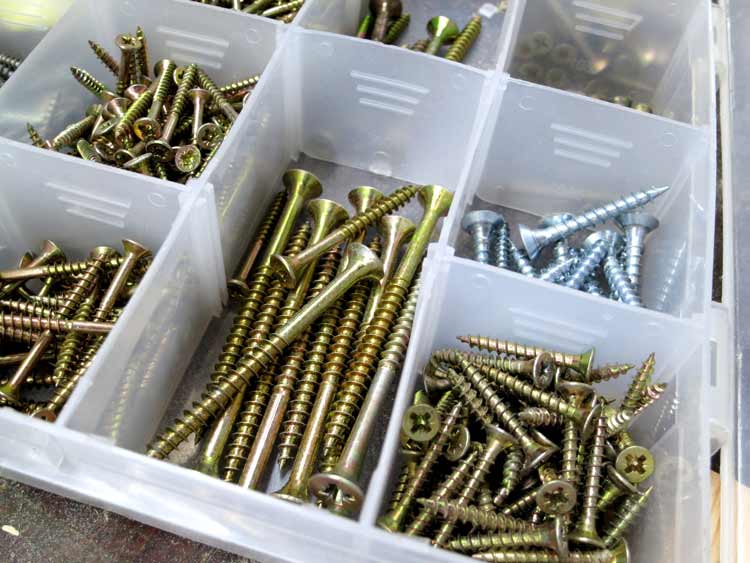 When you are buying galvanized screws, you will see two different types; hot-dipped and mechanically coated. Hot-dipped screws are more expensive, but they are the better option because they have a thicker coating of zinc, meaning that they last longer before they corrode.

304 and 305 grade screws are the most common and they offer some resistance to corrosion, but they are not tough enough for outdoor applications like decking where they are exposed to a lot of moisture. You need to look for 316 grade screws if you want them to stand up to the rain.

Stainless steel screws are around double the price of galvanized screws, but if you are concerned about rust, they are the toughest option.

Deck screws are often coated in copper or brass too as this is another type of metal that doesn’t rust. The coating prevents rusting, but the screws are not as strong as stainless steel. Copper can also take on a green color over time.

What Type of Screws Will Rust Outside?

Stainless steel and galvanized screws are best for decking, but you may want to consider other options. Consult the following table to see which types of screws rust outside and which won’t.

Will Painting Over Screws Prevent them from Rusting?

If you have a problem with rusting screws, you should consider painting them. Painting your deck is a good way to freshen it up and give the wood more protection, and the same is true of screws. Paint acts as a barrier and stops moisture from getting through to the screws.

It can also cover up copper screws that have started to turn green. However, bear in mind that paint is a temporary solution and it needs to be reapplied regularly if you want to maintain the protection.

Will Deck Sealer Prevent them from Rusting?

A sealer will not prevent screws from rusting forever. Just like paint, it can give a layer of protection, but it is less effective than paint because paint tends to create a thicker layer than sealer. Sealing your deck regularly is important, but you shouldn’t rely solely on it to prevent rusting.

What to Do if You Used the Wrong Screws on your Deck? 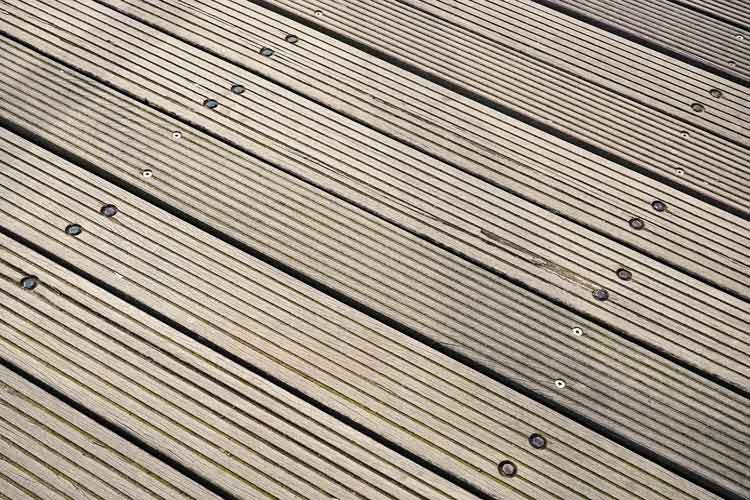 If you’re reading this after installing your deck and you realize you have used the wrong screws, what should you do? You can leave them as they are and accept that they’re going to rust, but this will ruin the look of your deck. The rust can leak out in the rain and stain the wood around the screws, so you need to do something.

One option is to remove all of the screws and replace them with the right screws. If you installed the deck fairly recently, the screws should come out quite easily. But if it’s been in for a while, they could be more stubborn. This is also a very time consuming option.

Alternatively, you can protect the screws to stop them from rusting. We have already discussed using paint and sealer, but you can also use mineral oil because it acts as a rust inhibitor. Take a paintbrush and paint a small amount of mineral oil over your screws and this will stop them from rusting for a while. However, you will need to reapply on a regular basis to keep the rust at bay.

Rusty deck screws can be dangerous. If somebody cuts themselves on the screw and gets rust into their bloodstream, they can get seriously ill. But this isn’t your biggest problem because the screws will be set into the wood, so it’s unlikely that somebody will cut themselves.

The structural integrity of the deck is your biggest concern. If the screws are excessively rusted, they can start to disintegrate and the deck may come apart. So, don’t ignore your rusted deck screws.

What to Do if a Contractor Used the Wrong Screws?

You can be left in a tricky position if a contractor uses the wrong screws for your deck and you realize afterward. The first thing you should do is get in touch with them and speak to them about it. As a professional, they should not have made the mistake in the first place and it’s up to them to fix it. Ask them to replace the screws with a rust-resistant option.

Hopefully, they will be willing to do so but if they are not, you may need to use some of the options discussed above to protect the screws from rust.

Your deck is exposed to a lot of water, so the screws can easily rust if you don’t use the right type. Ideally, you should use stainless steel screws if you want the highest level of rust protection. If you’re using different types of screws, you will have to use paint or mineral oil to protect against rust.