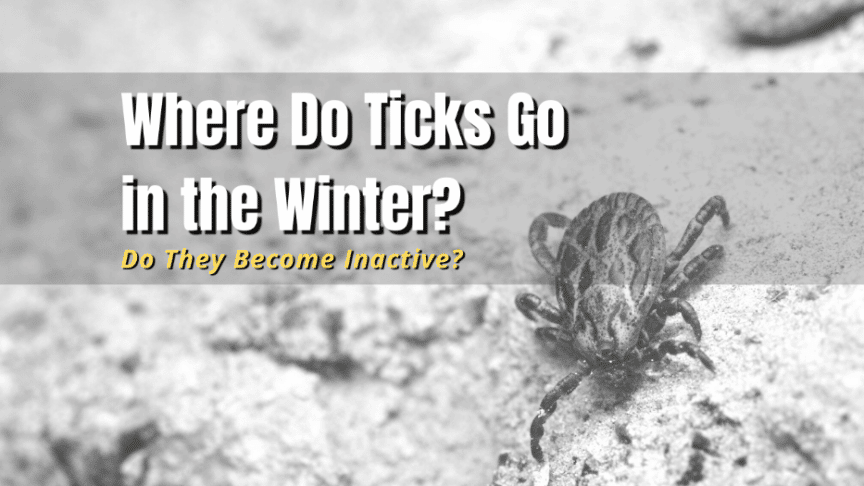 After a long spring and summer of checking for ticks, it seems like a relief to hike along trails come winter without insect repellents and tick checks. But are ticks truly gone? Does winter kill them? When exactly should you worry about ticks?

Ticks survive the winter when temperatures drop below 35F (1C) either by going dormant under leaf litter or brush or by latching onto a host (without feeding). If they can’t find either, then they can die from the cold. When temperatures rise and snow cover thaws, ticks become active again. When temperatures remain low, ticks are not a threat to humans or pets.

Do I Need to Check for Ticks in the Winter?

You need to check for ticks in the winter if temperatures are warmer than 35F (1C), especially when there’s no snow cover. Deer ticks, which can carry Lyme disease, remain active well into the autumn and can become active again during even short thaws during the winter. Since female ticks require blood to lay eggs in the spring, female ticks that hadn’t found a host in the fall will become active during even short thaws during the winter.

Take the same precautions during any warm spells as you would mid-summer, including long pants and tick checks.

Do Ticks Die In Hot Weather?

While ticks are perfectly happy with humid hot weather, if the heat is dry, many ticks will die while others undergo a physiological process called aestivation. Ticks need moisture to live, which they get through humidity in the air. In aestivation, ticks burrow below in brush or grass to enter dormancy to hold on to their remaining moisture.

That doesn’t mean that you should drop tick preventions, as some areas you hike through may have higher humidity or cooler temperatures than what the weather reports say, especially if the area is under shade. Always wear long clothes and check for ticks.

Are Ticks More Active After Rain?

Ticks can be more active after rain as more moisture in the air means that ticks can hunt for hosts without worrying about drying out. Heavy rains also have an indirect effect on ticks as rain encourages grasses and vegetation to grow taller and thicker, which provides more protection for ticks and gives them longer ladders for reaching hosts. Rain does not seem to impact the size of the tick population.

Do Ticks Overwinter In Leaves?

Yes, some tick species overwinter in leaves, including deer ticks. Snow provides an additional layer of insulation that helps ticks survive the winter.

Avoid raking your leaves to woodland edges, as a new study found that this common practice can triple the amount of deer tick come spring. Ticks thrive in edge habitats, like where lawn and wood meets, and leaf debris provides ticks an ideal winter habitat. The deeper the leaves, the bigger the increase in ticks. Instead of leaving leaves on woodland edges, either fully move them onto the woodland or compost them.

At What Temperature Do Ticks Become Inactive?

Ticks become inactive once temperatures drop below 35F (1C), especially when there’s snow cover. If temperatures rise above that temperature, and there’s no snow cover, then deer ticks can become active again (females that weren’t able to find a host in the autumn).

When are Ticks in Season?

While you can get a tick bite in any season, so long as temperatures are warm enough, ticks are most prevalent from May to August. This is because ticks lay their eggs in spring and larvae become nymphs. While the number of ticks remains the same, more ticks are on the hunt. Most new cases of tick-borne disease are reported from May to August, although it’s possible to contract tick-borne diseases throughout the year.

By autumn, ticks seem to disappear, but some tick species, like the deer tick, are active almost into winter as the adult females require blood to breed.