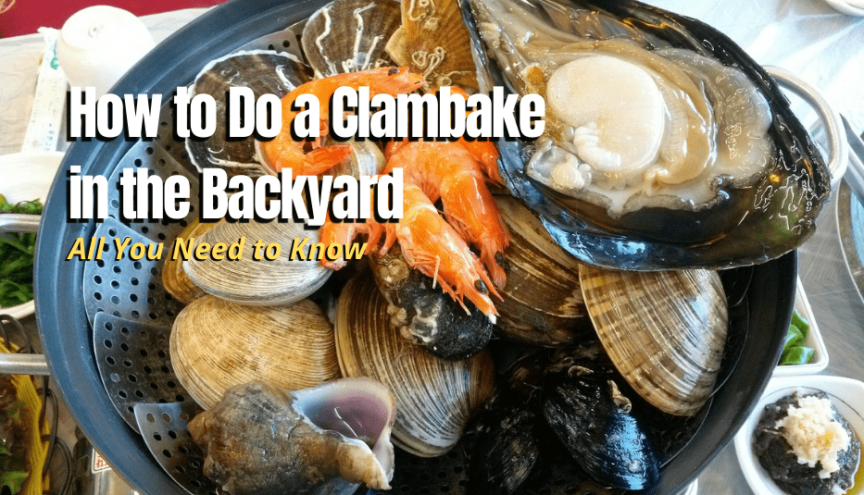 Thinking about throwing an awesome clambake party but have no idea where to start? People seem to find a seafood party intimidating to organize, but it’s pretty easy once you know the basics. I’m going to give you some tips and show you how to do a clambake in the backyard.

What Is a Clambake?

In very simple terms, a clambake is like a barbecue with seafood. The term refers to the methods of cooking different kinds of seafood, including soft-shell clams, mussels, crabs, lobster, and others.

Clambakes were typically held on the shore, and foraging for clams was often considered to be the most fun part of all. In today’s society, it’s not uncommon for people to cook clambakes on the stove or use their backyard grill.

Clambake is also a colloquial word for preparing an assortment of various delicacies and side dishes. A Portuguese New England clam boil is a variation on the clambake that combines the use of stovetop pots and the inclusion of linguiça (a spicy sausage).

You typically need a pit oven with layers of seafood to cook the food over them. The seafood is often paired with corn on the cob, onions, or other kinds of vegetables.

What Foods Can You Eat at a Clambake?

If you want to host a clambake but you’re not sure what to prepare, here are some of the most common clambake foods:

How to Throw a Clambake in Your Backyard

People think that clambakes are sophisticated parties, but they’re not that difficult to organize. If you’re planning on throwing a banger clambake, consider the following.

Regardless of what you prefer, every bake starts with the same basic ingredients: meat and vegetables. Naturally, no clambake would be complete without clams.

Nonetheless, once you’ve selected your shellfish, you’ll need to decide what you’d like to cook alongside them. Mussels are an excellent addition to the pot because their salinity matches the seafood theme.

Following that, you’ll want to incorporate vegetables. Red potatoes and corn are the foundations of this dish. Both of these contribute to the earthy tones and wonderfully absorb the flavor of the other components.

While seaweed is not a typical addition to a clambake, it is another excellent way to incorporate a taste of the sea. The green provides additional brine and contributes to the unique flavor of your clambake.

The traditional method of cooking your bake is to dig a shallow pit approximately two feet deep and four feet broad and line it with huge stones. From there, you’ll construct a wood fire, ignite it, and continually feed it larger and larger chunks of wood until the fire is reduced to embers.

This will create a hot, smoldering area in which to bake your meal.

If you lack a suitable location for digging a pit, have no fear. There are numerous additional methods to prepare this feast, including using a regular grill.

In order to make a grilled clambake, you need to place a roasting pan on the grates. Layer the corn and potatoes in the pan prior to adding the delicate seafood. Some people like to put the food in small foil packets with some broth and place them on the heated drill.

After selecting your ingredients and manner of cooking, you must carefully supervise your bake to ensure that everything cooks evenly.

Clambakes should be steamed for around an hour, regardless of where or how they are cooked. Whether using a stove or a grill, monitor the bake at that point to determine if the broth assisted in bringing everything together.

By contrast, while baking in a pit, a wide canvas sheet should be soaked in water and draped over the top to make sure everything is moist.

Once an hour has passed, glance inside your cooking appliance to ensure that the seafood has cooked completely. Any shellfish should be open, and lobsters should have a vibrant red color.

When the seafood is ready, you can remove it. You might want to leave the rest of the bake on the fire for another 15 minutes. When the vegetables are done as well, put a paper on the table and simply pour the food all over it. If you don’t want to make a mess, you can choose large serving dishes as well

What Drinks Go with a Clambake?

When you think of a clambake, you most likely think about wine. It’s true that there’s an entire philosophy about pairing clambake with specific wines, but there are also other drinks to try, both alcoholic and alcohol-free.

Unlike usual sangria, which is made with red wine, this one combines white wine, brandy, and a bit of freshly-squeezed orange.

You can always make a batch-made party drink (in both an alcoholic and non-alcoholic version) and surprise your guests with it. It beats having to worry about each individual drink or just serving plain beer.

Children and adults all love a nice cold glass of iced tea, especially during a hot summer day. Lemonade is also a viable option. Furthermore, your guests can customize their lemonade and ice tea with fruits.

I’m not going to dive into the specific, but nothing really pairs with seafood quite as wine does. Of course, there’s an entire philosophy on how to choose the best wine for specific dishes but that’s for another day.

What Should You Wear to a Clambake?

Because clambakes have a laid-back, low-key ambiance and frequently include lounging on the beach, choosing the appropriate attire for your seafood fest might be hard. The trick is to choose comfortable, relaxed pieces that maintain a professional appearance, and it never hurts to take a cue from the sea itself.

Where Are Clambakes Popular?

Clambakes are a New England tradition. The practice was borrowed and developed by early settlers on the Atlantic coast from coastal Indians, who boiled seafood over hot stones covered in seaweed.

Can You Do a Clambake on the Beach?

You can do a beach clambake by digging a pit for the fire used to prepare food. Double-check with local authorities to see if you’re actually allowed to make a fire on the beach.

Where Did the Term Clambake Come from?

Clambakes began immediately following the American Revolution. In the late 1700s, an old colony club in Massachusetts began hosting a Forefathers Day feast in honor of the English Pilgrims and the meals they were rumored to have consumed.

When Is the Best Time of Year to Have a Clambake?

Clambakes are usually held during the fall season. While clams are not considered a seasonal food item due to their year-round availability, additional aspects make autumn great for baking.

Can You Hire Catering for a Backyard Clambake?

Yes, hiring a catering service to relieve yourself of any clambake party-related hassles is possible. Just check to see if such a service is available in your area.

While seafood is definitely the key ingredient for a clambake, who’s to say you can’t get creative with some of the other recipes? Be sure to include alcoholic and non-alcoholic beverages in the menu, especially if you have children or designated drivers.