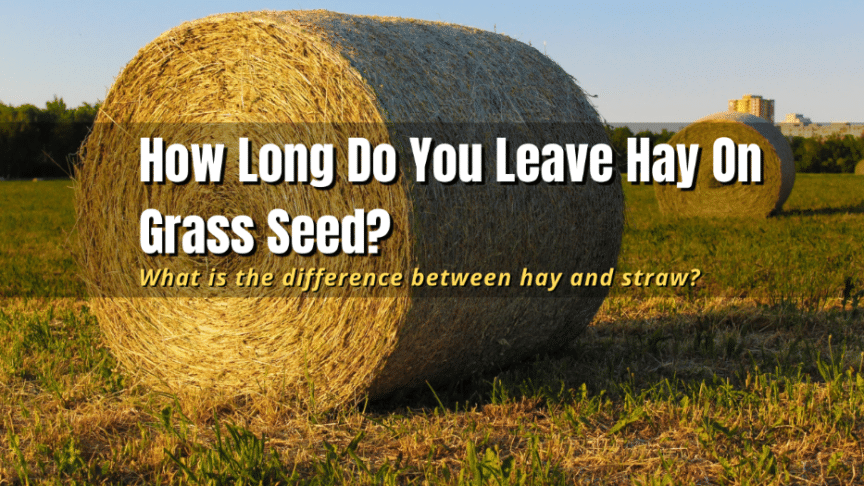 Grass is a pretty finicky plant when starting from seed. It needs direct light, it needs to be kept moist, and it needs all of this up to 3 weeks long. Laying a light layer of mulch over the seeds can help, but once you’ve rolled out the straw, what then? How long do you leave it on?

Grass can take 7-21 days to germinate, so leave hay or straw on grass seed until the grass is firmly anchored in the soil. By this point, if the hay has thinned and rotted, let nature compost it on the spot. If the hay is still thick, carefully lift the straw with a garden fork to avoid disturbing the grass below.

Do you need to cover grass seed with hay?

You do not need to cover grass seed with hay or straw, but using a light layer of mulch will improve grass germination rates without you having to water so much. Grass seed needs consistent moisture for 7 to 14 days in order to germinate. A light layer of compost or organic straw will hold moisture against the grass seeds, improving their odds.

If you’re overseeding established grass, you don’t need mulch at all. The existing grass will do the same.

Is hay or straw safe?

Using hay or straw as mulch seems like a wonderful organic method, but a staggering amount of straw and hay is now sprayed with persistent synthetic herbicides. These synthetic herbicides persist on hay and straw long after they’ve been cut and baled. They’ll even persist long after livestock eat the hay, the hay goes through an animal’s digestive tract, and after the manure has gone through the hot composting process for as many as four years. (Yeah, that’s pretty scary.)

These herbicides target broadleaf plants, so they may not be a threat to your grass seedlings. However, they’re dangerous to any vegetables, flowers, and even trees you have around your lawn, and straw easily blows into other parts of your garden. You cannot use the straw or hay in compost.

If you still want to use straw, buy organic straw or straw from a local farmer so that you can confirm the history of herbicide use.

Before applying hay or straw to any plant life, test it by filling a pot with potting soil and the straw, then try to grow beans or peas in it. Beans and peas are especially vulnerable to these herbicides, so if they can’t grow, you know that the straw has been compromised.

What can you use instead of hay or straw for grass seed?

The good news is that it’s not essential to use hay or straw when starting grass seed. Any mulch that you can apply lightly will work. Bark mulch is too heavy, but you can use compost (especially your own homemade compost), wood shavings, or even grass clippings.

Be careful with manure composts, as these herbicides can persist through the hot composting process. If you’re getting manure composts directly from a farmer, ask them what they’ve fed the livestock and that feed’s herbicide history. This can be a little dicey as they may assume that because their livestock are okay, that there’s no issue with the feed, but livestock seem to eat it with no discernible health effects.

When in doubt, try to grow peas or beans in it, and if they can’t grow, don’t use it.

What is the difference between hay and straw?

Hay and straw are often confused, but they refer to different things. Straw is the stalk byproduct of grain crops like wheat. After wheat is harvested, the grain is separated from the stalk, and the stalk is baled up for bedding. It has no intrinsic nutritional value itself (you don’t feed it to livestock) and is usually yellow or gold.

Hay is the whole plant except the roots, and includes the stalk, flower, and even seeds. Hay is usually grown from grass species like timothy or a herbaceous species like alfalfa and harvested to feed to livestock. It’s usually green, even when dried. Alfalfa usually has purple flowers.

Hay vs straw — what’s better for putting on top of grass?

Straw is better for covering grass, as hay contains seeds and straw doesn’t. Straw is a stalk, the leftover bit from growing wheat where all the wheat seeds (or grains) are already carefully removed. Hay contains the stalk, flower, and even seeds which can take advantage of the ideal germination conditions you created for the grass, and you’ll end up with a lot of unwanted seedlings.

People used to use hay anyway because alfalfa hay couldn’t be sprayed with persistent herbicides, as the herbicide would kill off the alfalfa, but new GMO varieties of alfalfa have ended that.

Can you put too much hay on grass seed?

Yes, you can put too much hay, straw, or other mulches over grass seed. Unlike vegetables and most flowers, grass seed needs light to germinate. If it’s covered up completely, it won’t germinate.

Newly germinated plants are also very delicate, and the weight of mulch may end up crushing them before they even get established.

When covering grass seed, keep the layer thin enough to allow light through. The goal is to hold moisture down among the grass seed, and you don’t actually need much straw to accomplish that.

Do you rake up hay after grass grows?

You don’t need to rake up hay or straw after the newly seeded grass becomes established. If it’s in a light enough layer, it’s probably half broken down by then, anyway. If it’s a heavier layer, or not decomposing, then yes, rake up the hay so it doesn’t smother the grass.

Starting a new lawn from grass seed can be tricky, but a light layer of mulch can make all the difference by keeping the seeds moistened for longer. When using hay or straw, find out whether they’ve been sprayed with persistent herbicides before use to protect your yard.