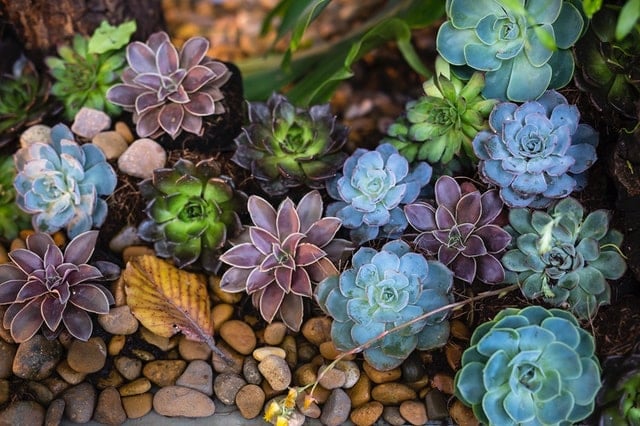 So, what are the best plants for rock mulch?

Choosing to grow your garden would mean making careful surveying and important decisions especially on the plant’s growing environment. These will all depend on conditions like weather, irrigation, and even the soil.

When it comes to soil, creating a garden mulch is important. The decision as to which kind of mulch you’re going to use is also important.

There has been a lot of debate and some would say it is no brainer as to choosing which mulch to use. But guess what? Not a lot of people would consider using rock mulch.

Why is that so? First, let’s discuss what is rock mulch.

What is Rock Mulch?

Rock mulch is a mulch made of rocks instead of barks, grass, straw, or compost. Most home gardeners opt for smoother, nicer, and more decorative (i.e. gravel) rocks to add color and life to their landscape garden.

However, rock mulch is not extremely popular among gardeners maybe because it seems so unnatural and that plants might not flourish on it. Although, the decorative aspect certainly can make your garden look amazing.

You need not worry about those when you use rock mulch because it has great advantages to it.

For one, having rock mulch can help you with temperature issues in your area or during a chilly or cold season. Rocks are known to absorb heat better (compared to other mulch materials) during the day. If you’re living in a much colder area and you have plants that need constant heat (or even just a bit warmer than your climate zone), choosing rock mulch can be your best friend.

Another advantage of having rock mulch is the cost. You only need to buy them once. Hence, even if it’s more expensive to acquire, it does not need to be constantly replaced because it does not decompose or decay.

Plus, rock mulch can also be good for garden aesthetics. There are a variety of rocks that comes in different shapes, sizes, and colors so you have so many options to choose from.

If you’re going to consider using rock mulch, all the other factors that come with gardening should follow which are: soil, water, and sunlight.

Since rock mulch absorbs heat and radiates it to the soil, it can also give extra moisture to the soil due to the heat of the rocks. That being said, rock mulch is used best when your climate zone or your garden doesn’t get much sun or heat and moisture.

Also, consider that when you create an irrigation or sprinkler system to water your plants. But realistically, water each plant according to individual needs. Some plants need a lot of water and others will be fine on their own.

Now that you know the advantages of using rock mulch for your garden, here are some ideas on which plants grow best through rock mulch.

These plants are ideal for rock mulch since they are drought resistant. They can survive even with less water. They also prefer the sun which is perfect for the heat absorption benefits of rock mulch. Yucca plants are also low maintenance.
<h3id=”coral” >2. Coral Bells – Heuchera Sanguinea

Coral bells thrive in the sun. If you’re in a less sunny place, using a rock mulch will certainly help grow these plants. Just make sure to add at least 2 inches of compost below the rock mulch to retain the soil’s moisture and reduce weeds from growing.

The blue fescue is perennial plans that would grow on a rock mulch because it needs sun to grow and it doesn’t need to be watered much. These plants are also good for containers in case you want to place them in one.

Pigs ears are succulents which means it can survive in less moisture soil. That’s why it’s the perfect plant for rock mulch. You can also opt to put them in containers or pots. Just make sure the container has enough holes for draining the water out. 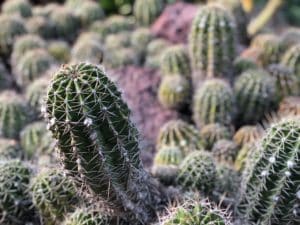 Like pig ears, cactus plants can thrive in drought. It also needs a good amount of sun for it to grow. Cactus are not easy to grow, so placing one in and maintaining it is a great option.

If you love tequila, you got to love growing your agave. They can grow perfectly in a rock mulch and even as much as 30 feet or higher. Imagine a plant that could be made into agave nectar or tequila! It sure is a treat.

Contrary to its name, ice plants can survive the sun and with little moisture. This plant grows flowers of varied colors – from mauve to purple – making it perfect for aesthetic gardening. The gelato orange flowers in the picture are super bright and will stand out in any rock garden!

Most of the plants mentioned here are succulents. In general, succulent plants are perfect for rock mulch for the many reasons we have mentioned here.

Succulents store up their own water in their leaves so they do not need as much water and moisture compared to other plants. They are also known to grow in sunny or warmer climates. So if you’re either in a zone with high temperatures or using rock mulch to store heat in from the sun, succulents would love that environment.

Not many know that orchids can grow in rock mulch. They actually do. In fact, it might just be the perfect place for them to grow.

Like succulent, orchids don’t need to be watered all the time. Some families of orchids also love some sunny weather.

Typically orchids will not grow in soil, but what can be done is you can buy potting mix and place it on top of the soil. Have the orchids planted in the potting mix and then it looks as if you have orchids in your mulch garden!

Also, some orchids can grow indoors.

Alpine plants are also categorized as succulents. Like the others we mentioned here, they can survive in rock mulch because they love a warmer climate and they are drought resistant.

This plant also blooms pretty white flowers that can be an added accent to your garden.

Using rock mulch sure does have its advantages especially if your area gets too cold or chilly at times. Sometimes, that kind of weather condition does not do well with various plants.

The good news now is that you have some of these plants shortlisted for you so you can easily choose, buy, and start planting them.

Remember, using rock mulch has its challenges especially with weeds and dirt. Make sure to regularly check your garden and under the rock mulch when such problems arise. The earlier you remove weeds and dirt out of the mulch, the better it is for your plants. Using landscape fabric is a great way to prevent weeds from growing through!

Growing plants in rock mulch can always be a challenge. The easy way out is to buy plants pre-grown and implant them into your mulch rock garden.

If you have any tips or plant ideas that should be on our list, don’t hesitate to comment below!